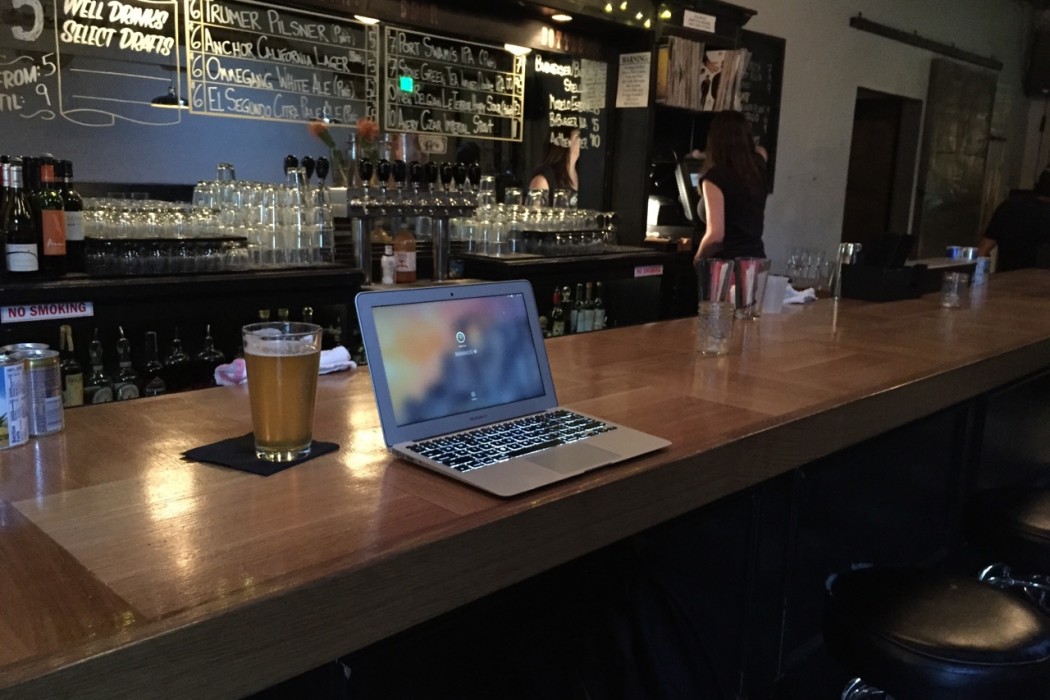 “Tell me this,” he says, taking a sip of Merlot and chasing it down with a gulp of his cappuccino. “What does happiness mean?”

I sit up straight in the wooden, uneven, bar stool. This question is being asked by someone, who just four flimsy minutes ago, was nothing but another one of New York City’s elusive and strange strangers. But now we’re talking. We are both alone, at the bar, myself with a stolen library book to keep me company, and him, his Blackberry.

“I think it’s just being content with what you have,” I say, thinking about the times recently I felt really good about myself and those times were when I was able to pay last month’s American Express bill and have $5.07 left in my checking account or when I flipped on the lights in my bedroom and looked out the window to see the New York City’s skyline fall asleep, feeling at ease that even four years later, this home still makes my heart ache with awe.

“Being content with what you have?” He says, disgusted at my answer. “You’re a writer. Come on, do better.”

“Okay,” I say, taking a minute to clear my throat. Exhaling the butterflies that were starting to unleash themselves inside of the lining of my stomach and inhaling the strength to try again. “Happiness is getting more than you expected?”

“Good,” he says, and I exhale like a deflated balloon. Finally, I’ve impressed this guy sitting beside me in a leather jacket, with thick-rims around his glasses and a chin that looks like it had quite the fastidious date with a razor. “But now you sound like you’re reading off a Hallmark card.”

“Then you tell, me,” I say, taking the attention of my glimmering red cheeks. “What does happiness mean?”

“Have you ever tried to go to sleep at night but you couldn’t stop thinking about something? It ate up every single thought, heartbeat, and desire?

Yes, of course. I thought to myself. That’s why I have these shopping bags underneath my eyes and I can’t get more than 2 hours of consecutive sleep a night.

“Happiness is waking up the next morning and doing whatever you can to get your hands on that.”

“I disagree,” I say immediately, before covering my mouth with both of my hands, making a makeshift muzzle I sometimes wish was always fastened on tightly when I was having conversations with strangers. “Every time I have ever worked toward something I wanted, when I finally got it I was miserable. I was suffocated by loneliness. I was rushing toward the next noun: the next person, place, thing.

“You’re 27,” he says, as if in this case, age is just a number in terms how many times you’ve felt heartbreak, achieved success, glared in the stinky eyes of failure. “You’re trying to become the Master of the Universe. I’m not talking about conquering those kind of things.”

One of his eyes is smaller than the other, but he forces both of them open wide, like two open lockets, revealing inside a truth that nobody has ever shared with be before.

Maybe if it wasn’t for our once a year physicals, where the doctor tells us to kick the carbs, the sugar, the salt, or for the moments when we’re paralyzed by fear, by nervousness, by ultra regret, when else would we remember that we’re alive?

When do we stop and think that our hearts are beating three times every second and that every single day our eyes open, while our heads are on our pillow, we have the chance to live.

To mess up our days. To shred our schedules. To make so many delicious mistakes that one-day we look at ourselves in the mirror and we look nothing like we did before, we finally, according to the motorcycle jacket mystery man, look happy.

“It takes a lot of courage to grow up and be who you really are.” – E.E Cummings On the occasional morning, while on the…