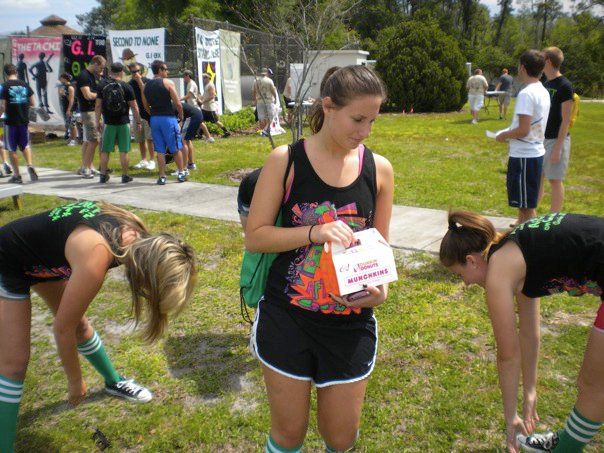 “I’m so unfamiliar with the gym, I call it James.”–Ellen DeGeneres

Whenever I move to a new city, one of the first things I’m attracted to is the idea of joining a gym.

And it’s usually for 4 important and strategic reasons:

#1 There is usually an unbelievable, impossible to turn down, must be some kind of catch (like you pay an additional 1$ per drop of sweat) deal to join a gym. #2 Living on your own requires you to do Iron Man type of tasks like flipping your own mattress once a year or opening a jar of Ragu, and you need muscles for that. #3 It makes me all warm and fuzzy to get the chance to shimmy/shake/twist/drop it down low on a weekly basis and the only place to do that other than a fist-pumping club is in Zumba class. And lonely little #4, I always think it could be a marvelous place to meet people.

Jennifer, I couldn’t be happier!

She says as if I just told her that I’m giving up breathing in the foul smells of New York City for an adjoining mother-daughter condo in Boynton Beach, Florida. My mom’s the first person I called when I entered my latest very serious, year-long, relationship with the gym across the street from my apartment. But before I’m convinced she’s referring to how thrilled she must be that my body parts are going to form an alliance and stop hibernating idly on the couch, flexing only when I laugh out loud while binging on an entire season of Orange is the New Black, she says, It’ll be a great place for you to meet a nice guy. I’m going to mail you some new workout outfits tomorrow.

It took only 3 gym going days for me to blindly step on a treadmill that was already running, dare I say it, at full speed. Immediately, I was catapulted off the track, tossed up into the air until my loyal friend gravity came to slap me on my bottom. There I was, with drool slipping out of my mouth, trying to answer questions from nervously frightened onlookers.

Are you okay? I blinked twice.

Did she just fall off a treadmill? I blinked once and then I let out a sigh of embarrassment and confirmation that just as I was able to see the crowd of people around me, they could also see me.

If ever there was a time to be invisible, I thought, now would be really great.

Here are 8 other reasons why I’ll probably never meet a guy at the gym:

1. Cartoons are what I enjoy watching on the TV attached to my cardio machine. It’s the only safe alternative to chanting outrageous commentary back at an incompetent and overly biased nightly news broadcaster.

2. Occasional naps. I do this routine called 600 abs where I lay down on the mat and do 600 crunches. By the second grueling set of 200, I am passed out as if it is kindergarten nap time, until someone almost drops an 8 lb medicine ball inches from my resting head.

4. I use the slow passing time on the elliptical machine to practice out loud some good to know phrases in Spanish, but not from Rosetta Stone, from Pitbull.

6. I am getting sweaty just thinking about how sweaty I get at the gym.

7. I come dressed to the gym like I just ransacked Goodwill or the clearance rack at an Old Navy store. None of those matchy, color coordinated workout outfits from Sports Authority for me! I wear a combination of the semi-clean clothes I find chilling from the entrance of my bedroom to the front door.

8. Because just running on the treadmill can be quite the bore, I often bust out middle school dance moves like the Macarena, the Running Man, and the 3-minute jig I put together to Spice Up Your Life for a Halloween Talent Show in the 7th grade.

The worst part about flying off the treadmill, at a gym you recently signed a yearlong membership at, that’s located in the very heart of your New York City Neighborhood, isn’t laying there motionless, trying to lift the junk in your trunk off the ground or coming to terms with the humiliation that a big portion of the guys surrounding you are giving you funny looks because they probably recognize you from JDate, or dare I say it, Tinder, it’s going back a week later, on a Tuesday night, and having some put together stranger with just the right amount of sweat balls on their forehand, tap you on the shoulder while you’re in the middle of contemplating how to lift yourself out of a squat and say:

Excuse me; aren’t you the girl that took that epic dive off the treadmill last week?

So mom, maybe I will meet someone at the gym.

FROM YOU SHOULD THROW YOUR STUFF AWAY

Every once in a while, I wake up in the middle of the night and feel like I can’t breathe. This is not a…