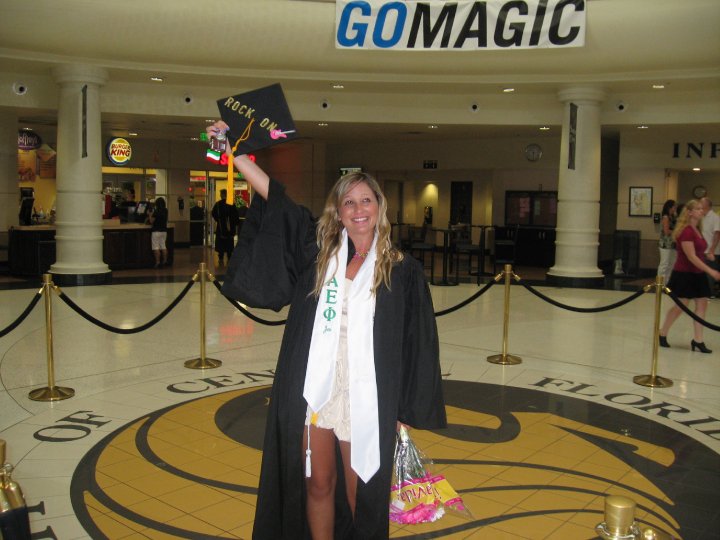 “In the business world, everyone is paid in two coins:  cash and experience.  Take the experience first; the cash will come later.”  –Harold Geneen

You leave college with:

-A list of mistakes. I wish I didn’t kiss that guy, or take on a second major half way through my junior year, or spend so much time burying my nose in an Astronomy textbook instead of cheering on the football team.

-A piece of paper, more formally known as a diploma.

-4x the amount of boxes and suitcases exiting college than you did when you moved into your freshman dorm. Now, you come with “baggage”. A microwave that fed you the only hot meals you ate over the last few years, a maroon sofa that housed many visitors from around the world, a poster from the rock band you met back stage after the homecoming concert.

-A GPA you’d prefer to round up a few notches.

-A resume that’s spray painted with a list of clubs that your advisor told you would help get you a job. Society of Professional Whatevers or Sigma Mu Mu Honor Society.

-Enough overpriced textbooks that at least three palm trees had to be sacrificed so they could all be made.

-With the overwhelming task that now, after 20+ years of having your life controlled by lesson plans and school bells and principles with funny mustaches, you’re on your own to figure all of this out. To find a job (that maybe, hopefully, you’ll actually like) that will somehow pay for you to count sheep safely in a bedroom that’s not owned by your parents and occasionally splurge on things like whole wheat pasta or Charmin toilet paper.

This morning as I was ironing the wrinkles out of my blouse for work with my blow dryer, I listened to Matt Lauer on the Today Show report that next year, seniors at over 200 colleges are going to have to take a post-grad SAT type test in order to give them ANOTHER performance indicator to slap the faces of potential employers with.

You’ve got to be kidding me, I forced my drowsy mouth to say before my flapping outraged arms knocked over my very berry morning smoothie.

What a terrible idea. Leave these indebted, exhausted, all-tested out, kids alone. Some of them, of course, are about to take the GRE or the GMAT or the GET ME OUT OF HERE test so that they can go get higher degrees. And good for them. The rest of us, the crazy, free-spirited, adventurous nomads, will graduate with all the things I listed above and have to gather our knapsacks and our on the verge of a quarter life crisis selves  together and figure out what to do. We’ll also have our mother’s pestering us to figure out what to do with our lives and to get a job. Trust me, that’s enough motivation and kick in the butt to figure it out. To push ourselves to go on as many interviews as we can and take a part time job at Starbucks until we really figure it out.

We spend four years taking tests that challenge our noggins to memorize lines from textbooks and spit it up onto scantrons. Now, in order to seek freedom and in order to dazzle hiring managers some more, we need to ace another test?

In all the job interviews I’ve flirted with, what trumped my GPA or my list of honor societies that I paid dues to join in order to corrupt my resume with their presence, was the actual on-the-job experience i had. My internships and my part time jobs and my summers spent trying to earn a paycheck doing many different types of activities, was what blew them away. What proved to them that not only do i have the college education, but i have the work ethic and the ability to keep up in an office environment–which isn’t a thing like a college classroom.

The first internship I ever had was at a scuba diving magazine in Orlando, Florida. I had never been diving in my life. To be honest, the deep blue sea kind of gave me the heebie jeebies.. But, I took the internship because I had these XL large dreams of one day becoming a feature writer for a magazine, and it was the only company that would give me a chance.

So, I spent 40 hours a week sorting through piles of regulators, and fins, and masks, and tanks trying to teach myself the basics of diving before I could teach myself the basics of writing about the best places to dive or where to find the most exotic coral reefs. I stayed alert in editorial meetings as I watched writers pitch stories they fantasized about for weeks, get shot down by editors in minutes. I made quick decisions when the art editor would ask me to give the final pick on what image should be on this month’s cover. And often times, i ran around quicker than my flip flops were prepared for, as there was always a meeting to prep an event to set up for and a crisis that was tossed on to my to-do list to settle.

On my last day of the internship, when my  supervisor Eric, the managing editor of the mag, asked me if had any more questions for him, I said:

Eric, I have one year left of college. What should I learn so I could get a job after I graduate?

He said, learn everything you can. Outside of what they’ll teach you in class.

When I graduated, I was unemployed until i spent a year working as a consultant for a sorority before i was unemployed, again. I worked as an assistant editor at a magazine that let me write a sidebar piece once a month (because my real job was to make copies and scoop up dog poop), as a cold-calling article pitcher in the world of PR, and now, finally, at my best job yet, as a copywriter.

None of my professors or classes taught me how to get comfortable in the work environment.  They never preached that after you graduate, you may have nothing. No job, no place to live, no recognizable skill set other than being able to memorize large amounts of information. None of them told me that I’d hop from job to job over the next 3 years like I was on a Pogo stick or how to gain the endurance to be “on” for a 9+ hour day. How to know when it’s time to ask your boss for a raise, or company email etiquette, or how to still stand up and function when you’re hit in the tummy with painful rejection. My professors didn’t quiz me on how to say NO when a job is taking advantage of you, your time, your wallet, and your room for growth.

And acing that internship, and the next three i had, were what employers valued. What they really cared about.

Here’s a link to an article on this nonsensical Post-College SAT test.

Subscribe (top right) to The Things I Learned From.

Send me a love letter or just a quick hello: thethingslearned@gmail.com

FROM “WHY DO YOU WANT TO BE A WRITER?”

Through the other end of the phone, someone with light breathing and a nonchalant undertone will suddenly, yet consistently, always ask me: Why…