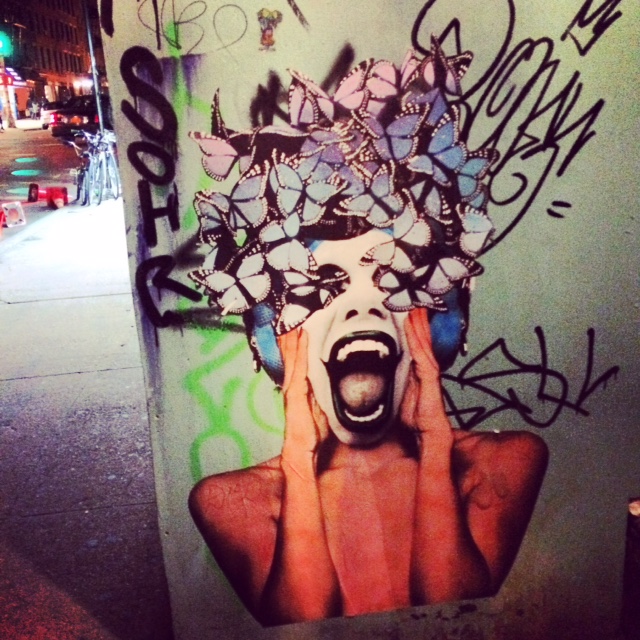 Do you ever look at somebody in the eyes and want to thank them for getting out of bed in the morning?

We only ever thank people for things that don’t even matter. We thank them for stopping and taking a picture of us in front of a goat with two heads or for pointing us toward Lexington Avenue so we don’t walk all the way to Park Avenue instead.

But we never thank them for getting out of bed in the morning, when we know, oh god we know so well, how hard that can be. How some days it feels like gravity has turned against us and our energy is still fast asleep inside a dark cave and we don’t have the tiny strength it takes our pinkies to slap the blankets off our chest and push the pillows off our faces and put one foot, than the other, on the solid, functional floor.

Do you ever look at the person you’re walking side by side with for three blocks and wonder if they have ever been in love before? I bet 55% of people have experienced the upward roller coaster track climb of love, so when you’re walking next to them, and you know the odds are 1 in 2, do you wonder which one of you has fallen harder?

Do you wonder which one of you is screaming more, on the inside, waving their hands, silently, desperate to grab onto that statistic?

And if it is, indeed them, do you ever want to pull them in close, by the fringes at the bottom of their scarf and ask them who it was and how it felt and where that person is now?

Because if we’re talking numbers here, the divorce rate is 56% and the bounce rate back off and back on Tinder is 75%, so there’s a very good chance that the person you’re walking beside, past a smoking food truck and a guy pushing a shopping cart filled with deflated water bottles, has a defunct, defective, oscillating heart strapped to their chest.

I spent 97 minutes on the phone with a health insurance salesman the other day. He was trying to find me a plan that wouldn’t eat alive my savings account, which has almost dwindled down to  just a ball of $20 bills that I hide all over my apartment.

“How are you feeling about yourself?” He said, as if that question was as blase or taboo as asking someone how they are, as a general, nonchalant way to kick off a conversation.

I swallowed the loose bite of pizza that I had been chewing on and pushed the volume up on my phone three notches.

“What did you just ask?” I said, surprised because we went from talking about HMO plans to real live, untamed, and animated feelings.

“How are you feeling, right now, about yourself?”

I took a gulp of my cherry coke and decided to tell him the truth.

“Not great,” I started, folding up my cheery external disposition and laying my true cards on our imaginary phone call table. “I just lost my full-time job. I’m trying to write a book that’s due in a month and I haven’t even written a chunk of it. I just told someone I’m practically head over heels for them and, well, it didn’t go well. And i’m sitting here eating two slices of pizza and drinking soda because I was starving and am just too lazy to walk thirteen blocks south and four avenues west to shop for kale and potatoes at Trader Joes.”

I took a deep breath and felt the air bounce up through my esophagus and then back down to my toes. “So I guess I’m not feeling so great about myself.”

“I’m glad to hear you’re doing okay,” he said, reminding me that those are just hiccups. Things curable by a good night’s sleep. A glass of water. A conversation.

Why don’t we have more of those with people? Why do we only speak to strangers when we have nothing important to say?

I rode the subway from the top of the line all the way down to the bottom, last week. I wanted to go far away. I wanted to travel in a straight line because I felt my world was becoming crooked.

I sat next to a lady whose necklace made my eyes bulge and my heart race. I loved everything about it. So much so that I couldn’t stop looking at it.

I should tell her, I thought to myself. I should say something. I bet she’d like that. I wonder if she would.

It took me eight subway stops and 20 minutes to finally say:

“Your necklace is award-winning, in my mind.”

She sighed into a giant smile, probably glad to know that’s the reason I was staring at her intently, making squishy scary faces at her neck.

“Can I ask you something?” I decided to go on, with this brave new sense of courage I picked up in between Union Square and Astor Place. “How are you feeling about yourself today?”

“Oh,” She responded, as taken back as I was when I first heard that question. “Well, I, I guess I’m doing okay. Better than before. My daughter just moved away and my son just got his eyebrow pierced and my boss asked me to send him something as a PDF today and it took me 56 minutes to figure out, and when I emailed it to him, he sent me back the emoji of the monkey with it’s hands over its eyes.”

Eventually her stop came. Mine didn’t because I didn’t have any place to go. So I said goodbye. I said thank you for answering that question and she nodded her head before stepping onto the platform and off to her world, her life, her own set of magical problems.

I rode the subway to the very end of the track and then I got off and rode it all the way back up again, asking that question six more times to strangers I know I’ll ever see again.

I suddenly felt a little bit better about myself, that day, at least.

*Ps. My statistical numbers in this piece aren’t real. They are fictional. They are guesses based on zero research. I majored in poetry for a darn good reason!

FROM WHY I DECIDED TO GET BACK IN SHAPE

Beginning at a very young age, I was always a sporty child. I started dancing at 3, playing basketball at 6, added soccer at…