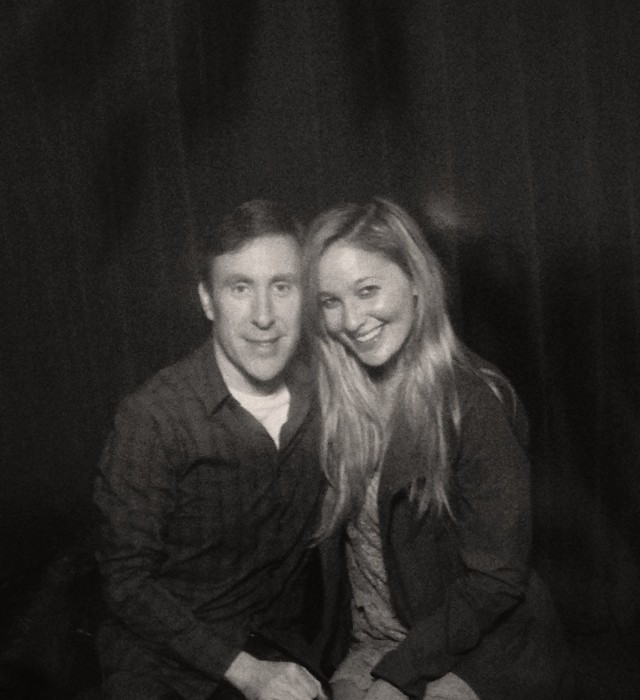 “Sometimes I think the difference between what we want and what we’re afraid of is about the width of an eyelash.” ― Jay McInerney

It’s 7:58 on an unforgivably cold Saturday evening in March and I’m standing in the middle of the belly button shaped lobby of the Gramercy Park Hotel. Alone. Tapping my mummy wrapped toes on the linoleum floors while a man and his wife, in matching polo shirts, sit on an adjacent couch and whisper about who it is that I’m waiting for and why that person is making me look so uneasy—as if I just ate fowl Chinese food or desperately need to pee.

I’m spending the night with Jonathan Tropper, an accomplished author who has written a handful of books, 3 of which will become movies, and he also produces a hit TV show. But I’m not here for any of that. I don’t aspire to be a famous actress and I left my jittery “I’m your biggest fan” attitude at home, with the copies of his book I won’t ask him to sign. I’m standing in the bull’s eye center of this lobby waiting for a man I’ve never met before to tell me what I already know.

The  aggressive winter winds makes the revolving door swing even faster and as I see the outline of an unfamiliar body being pushed inside, no amount of outside cold air can help hide the pool of sweat accumulating underneath my armpits.

He has arrived and I’m starting to kick myself for wearing a gray top.

Like most people who enter our world and flip it upside down like an overused mattress, I came across this author by accident. I had just gotten home from checking out a handful of books on hold for me at the library when I noticed that the kind librarian made a blistering mistake. She gave me a pile of books on hold for a Jesse Glan, not a Jen Glantz.  I pick up a book that’s not meant for me and decide to find out what kind of novels this Jesse Glan likes. I couldn’t put the first book down, so much so that I woke up in the middle of the night and emailed the author, declaring to myself that I’d keep emailing him until he wrote me back, until he agreed to meet with me. I had to see what a person who writes this well would be like in person. I just had to ask him just a few questions.

And now we are here, together, shaking each other’s hands.

Sitting in front of this author is like viewing an almost extinct animal at the Bronx zoo. He’s a successful writer, one that has also garnered success in the film and TV industry. Species like him barely succeed at clawing this earth anymore and I want to remember every word he tells me, every piece of advice that rolls off his tongue.

“I’m no different than you, no smarter, no more driven.” He tells me to break the ice, to get me to relax and stop fidgeting with the edges of my pleather pants.

“I see you write for JDate” he tells me, which makes my round cheekbones turn all 50 shades of red. I start by telling him about my writing and then I make it a point to just let him speak to me. To tell me the hows and the whys behind his immaculate success.

Our conversation twists from one that’s about the behind the scenes of how to write and become published to one that’s extremely personal: about religion, about broken-hearted unrequited love, about the awkward situations going on around us. It’s conversation etiquette that some would frown upon for any other type of first encounter. But it’s real and it’s raw and for a second, I forget where I am. It could be a hotel bar in New York City or a couch in my apartment with my most honest friend. He doesn’t tell me anything I didn’t already know. I didn’t think he would.

I’m quite glad we’re not wise enough to ever follow our own advice. My god, if we did life would be a giant bore. I wouldn’t be spending my Saturday night watching the lips move of someone I admire, having them slowly turn into a friend.

It’s a few minutes after 10pm when for the first time all evening, he acknowledges the vibrating sound machine going off beside him on the table. His iPhone is yelling at him and he finally caves in to answer it. He’s an hour late for a party he promised to attend and instead of rushing to put on his coat and pay the bill, he digs his behind even more comfortably into the couch, promising not to leave me until I have what I need from him.

And I tell him he has given me more than I ever thought he could—the truth.

He leaves me with everything I need to know about writing and love in a deliciously expletive package. Lessons that are unimaginably simple as they are wildly difficult to remember to do: Move past any fear that’s stopping you and don’t ever give up.

Somehow, in the cloud of loud bass-thumping music and jolting screeches of laughter from surrounding tables, there’s a bit of  silence that floats above us as if the place just turned on the lights or you’ve seen someone without their makeup on for the very first time.

A gorgeous sign of embarrassment splashes across my face when I look him in the eyes and tell him that I won’t.

FROM YOU WILL ALWAYS HAVE YOUR WORDS

There’s one more swig of watered down coffee left in my cup when I finally say, “By the way, four years ago today, I…