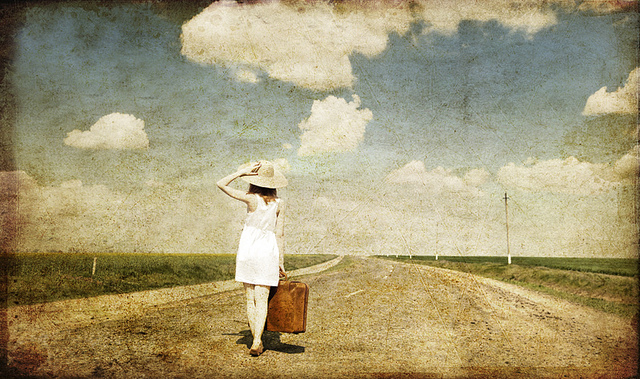 “Running away was easy; not knowing what to do next was the hard part.”  ― Glenda Millard

While most people were kicking off the new year with a list of resolutions on how to change and become a better version of themselves, I was looking up flights, checking my savings account,  and trying to figure out how to leave.

I wanted to go far, far away.

I had a shattered cell phone, over ten unpaid bills eyeing me from the coffee table, no full-time/9-5/cubicle desk job waiting for me to return after the holidays, a rattled heart, and a lot of people asking me, “HEY! What are you going to do next?”

I just finished writing the first draft of my second book and I inherited a temporary amount of free time. So I wanted to leave. To turn off my WiFi and book seat 8B on an international flight somewhere moist and sunny and delicious.

I wanted to go to Costa Rica. I put a 24-hour deposit down on a flight. Went to Amazon and bought a backpack. Walked to the library and took out a touristy book on a country that I hoped would hug me hello when I desperately needed someone, someplace to do that for me.

I looked at my inbox, my mound of bills, my sagging savings account that wasn’t being replenished like it was in the past and I said:

“ADIOS, you don’t have to leave, but I’m not sticking around to entertain you.”

And then I called my MOM.

But I called her, I think, because I knew what I was about to do wasn’t right.

I ran away once before.

We were seven, my friend Jamie and I, when we decided to run away. It is a mystery what exactly drove this idea into our Disney infested minds back then but I am sure it was something as insignificant as one of our moms telling us we could not have an ice cream bar before a home cooked dinner or that we were not allowed to have a slumber party for the fourth night in a row.

Our minds were set. We were going to pack up our belongings and flee. Two child pioneers setting off for an adventure. Leaving Mrs. Weiner and the second grade class to learn grammar and cursive on their own.

We spoke, briefly, about what to fill our two barney-colored glittery backpacks with. Just the essentials, we agreed. A Barbie and her Ken. Chinese jump ropes and comic books. A snack pack and a string cheese.

We opened the front door of my house. Took a deep breathe and marched away.

We managed to get exactly 8 houses down when we decided to rest our Keds underneath a giant banyan tree. We began to sort through our belongings. Already hungry, the string cheese and the snack packs, that were supposed to last us for…for…for however long this stint would last, were instantly devoured! As we wiped our mouths, we turned toward each other, realizing that going far away wasn’t anything like we imagined it to be.

Far away, we learned, didn’t have the ice cream bar or the slumber party privileges either.

So that time, we walked back home. And this time, I canceled that flight.

Something in my gut was telling me that going 3,204 miles away wasn’t going to make feel the way I wanted to feel. And I knew the stack of bills, the looming to-do list, the rattled feeling in my heart would find a way to stuff themselves into my carry on bag and make it on the trip with me.

Our problems are so clingy.

I’ll go there eventually. But not when I want to run away.

FROM HOW TO STOP PROCRASTINATING YOUR HOLIDAY SHOPPING (+ A $50 giftcard)

This is what happens every single year. Oh, Hanukkah is tomorrow? What the heck am I going to do? Is Macy’s still open? No?…