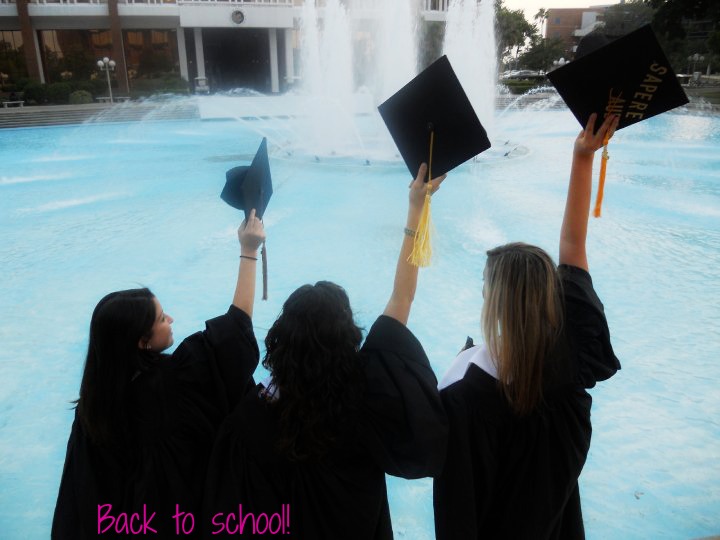 “He who has begun has half done. Dare to be wise; begin!” – Horace

Ever since I walked off the stage at my college graduation (Let’s be real  – my mom and dad had to drag me out of that place while I was kicking and screaming), I wanted to go back to school.

Even before that, when the University of Central Florida sent me my “Intent to graduate form”, I made an appointment with an academic advisor and brazenly said to her, “Why do I need to sign this? I have NO, zero, zilch, intent to ever graduate?”

Leaving college and entering the real world felt like someone had just catapulted me straight into the middle of some improv comedy show and said, Go! Figure out how to blend in and jive with this uncomfortable situation that’s trying way too hard to be funny.

Graduating college is a truly frightening thing. You’re expected to not only have a clue of what kind of career you want, but also how to go on a interview and answer questions like, Where do you see yourself in 5 years? Or What’s your biggest weakness?

It feels like someone is prematurely taking you out of diapers and putting you in some big girl underpants knowing you’re just going to make a terrible mess of things, every now and then.

I’ll tell you a secret.

Some days, i’m not quite sure i know what i want to be when i “grow up”. It’s not that easy to figure out.

There’s no more free tuition to lean on or a midterm exam to cram for while you try and figure it out. Now, there’s a 9-5 waiting for you during the day, a stack of credit card bills trying to flirt with you when you go home at night, and a balding internist who keeps on telling you to cut down on the freaking carbs.

There’s life slapping you in the face while you’re trying to figure it out.

Last Tuesday I turned 26. Which is a birthday that holds as much excitement as the movie Oceans 13,  A birthday that most people will tell you holds no significance, one that’s looked at as a stepping stone toward the big 3-0. So, as a way to “spice things up” and remind myself it’s never too late to try something new, I decided to enroll in a Fiction writing course. I decided to go back to school and take a night class.

To tell you another secret – writing fiction terrifies me. I had to do it once for a class in college and I wrote a story about a girl running into her childhood friend in the frozen pizza aisle of the grocery store. It didn’t have a plot or a climax and the teacher wrote a giant question mark on the top of the paper instead of a grade.

But almost 4 years since leaving school, I want to try again.

Life can be as simple as you’d like it to be. You can stick with one career for the rest of your life and probably be OK.

Or, you can try 16 different ones until you find the one that doesn’t make waking up at 7am on a Monday such a drag.

That same academic advisor who practically rolled her eyes at me when I refused to sign that intent to graduate form also sat across from me when I was 18, as a college freshman.

I was sent to go see her, then, because I had filled out a change of major form six times during my first two months in college.

If you don’t know what you want to do, she said,  just do something.

And back then i did. I took a History of Rock and Roll course before i found myself scribbling down notes in a Philosophy class, before trying a semester of Ballroom Dancing, before finding myself sitting front row in a nonfiction writing course.

If anything, your age is just a giant billboard you can’t ignore, while you’re cruising through the intersate highway of your life, screaming at you that you’re never going to get any younger. That though you can’t go backward, you can always pull over, or press the emergency break, and stop feeling bad for yourself and your situation and start something new.

Maybe that’s the greatest thing about getting older.

TIP: If you want to take a class to try something new or brush up on skills you already have, check out the ones offered at local colleges. Most of them offer “ non-degree seeking classes”.

Tell me, if you could go back to school, what class would you take?

As always, before you go, don’t forget to subscribe (type your email into the box on top or on the right). I send one email out a week – on Monday Mornings – that’s filled with tips to kick your butt out of bed in the morning.