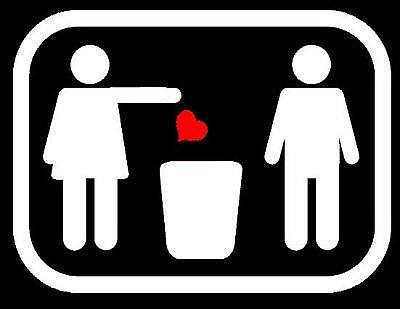 I remember feeling my heart hurt when Carrie Bradshaw got broken up with through a post-it note in Sex and the City.

Sure, it was fictional.

Sure, I’m not Carrie Bradshaw and I was never in a relationship with Berger or anyone who even remotely resembled Berger.

But, it didn’t matter. My heart broke and my mind became flustered with the idea that someday, someone, would break up with me in such a heartless, rude, impersonal way.

According to the NY Daily News, 33 percent of people admitted to breaking up with their significant other through social media, text messages and email. Let’s hope our courage and respect rises— not this number.

See below for some of the worst breakups i’ve seen online.

I felt that heartbreak again last week when a story surfaced about a guy breaking up with his girlfriend on Instagram, with the hashtag #transformationtuesday. Could you imagine, for a second, your whole relationship, with a person you’ve spent time with and knows many of your secrets, ending through Instagram? Not a phone call, not a face-to-face chat, dare I even say it — not even a text message.

I sure hope this Instagram breakup does not become a new trend like #TBT or #OOTD or #YOLO have become part of our weekly actions.

Could you imagine getting broken up with in 140 characters or less? This month, WWE Superstar, “Fandango“, broke up with his girlfriend in a tweet that said, “Hey, @RealSummerWWE. Did you get my text? Like I said, it’s really not me, it’s you. It’s over…”

Or take Sarah, who learned that her fiancé (not new boyfriend — or crush) was ending their engagement over Gchat! Gchat is typically used as a way of catching up or chatting during work, not a place to call off a wedding.

These days, however, break up revenge can be taken to a whole new level. A girl who was broken up with by a guy via text message, decided enough was enough — she took his text message and her very long response and posted it all over her blog.

Maybe this alone proves that words as important as “I don’t think this is working” should be said face-to-face and not on the record.

Thought being dumped on social media was bad? What about when there’s a meme to go along with it? Ne-Yo really took the cake when he ended his engagement with Monyetta Shaw in this breakup-meme on Instagram last July. He posted this picture along with a note to his ex: “I’ll aways be there. ALWAYS. @incognemo Forever my miracle.”

FROM THE THINGS I LEARNED FROM 2014

I woke up one morning in 2014 and my world went bonkers. Totally and completely mad. My phone had 17 missed calls. My inbox…