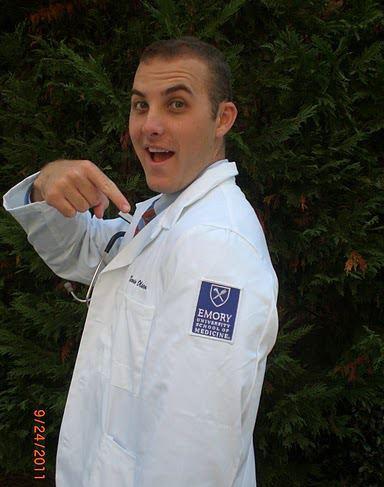 A good friend of mine from high school and The Things I Learned From reader, Kevin Olsen, shared this stirring and authentic story with me a few days ago and now I am honored to share it with you, my friends. [If you have a story you would like to submit, I’d love to read it, post it, learn from it. Send it to: JenGlantz@gmail.com]

“How important it was to know as much medicine as I could, so that maybe one day I could save someone, even if they seem hopelessly gone.”–Kevin Olsen

I was just there to shadow…

It was 3pm on a Wednesday. I boarded the shuttle to Grady, anticipating what I might see in the emergency department that night while shadowing Dr. Martin. Although I had been in an emergency department before, I had never seen a true emergency. Most cases were colds, unobservable pains, or broken limbs; nothing that got my heart pumping or my adrenaline going. “Tonight is the night” I thought, as images of drug overdoses and bleeding, penetrating wounds danced around my mind, both exhilarating and frightening at the same time. Not that I could really contribute to the patients care, as I was only 6 months into my medical education, but I knew I loved high-stress, fast-paced, and adrenaline-pumping situations, so emergency medicine seemed like a fit.

The shuttle pulled to a stop in front of the original Grady hospital and I stepped out in my blue scrubs, Danskos, and white coat; stethoscope slung around my neck and note cards in my pockets; I looked good and like I knew what I was doing. As I walked past the large panes of glass that line the entrance to Grady, I looked myself over and gave a little nod, as if saying “Yeah, you look like a doctor, keep that confidence up”. I made my way to the emergency departments’ “red zone” and met up with Dr. Martin. “Hello, Dr. Martin, I’m Kevin, I emailed you about shadowing?” I half-asked, half-declared to her. “Oh yes that’s right. Hello, I’m on my way to see a patient, follow me” she replied. I thought to myself, “I don’t even know her yet and she’s already bringing me to see patients, this is going to be great!”. It wasn’t. We saw 5 patients over the span of 3 hours with complaints ranging from angina to a swollen finger. These were not the emergency cases I had envisioned. I was contemplating cutting my visit to the ED short when a loud *BEEP* came over the intercom system and my head perked up. “We have a 76 year old female in cardiac arrest found down in her home by her family. No vitals could be obtained, CPR is being performed. We’re 7 minutes out”. Wow! Now this is the rush and life or death struggle I was yearning to see.

Dr. Martin insisted I go into the trauma bay with Dr. Hoffman, the attending physician, and asked if I had ever performed CPR. I replied that I knew how, but had never performed it on a person. I put on a gown and gloves, giddy that I might actually get to participate, and entered the trauma bay. There were already 7 or 8 other people in there when I arrived, so I found a spot near the corner of the room and settled in. No sooner had I pivoted my body toward the gurney, than the paramedics were walking a frail, barely covered 76 year old women’s body into the room. She had an IV running from her arm, an endotracheal tube down her throat, and a giant paramedic thumping on her chest. They transferred her to the gurney and started going to work; it was controlled chaos. Dr. Hoffman was at the foot of the gurney, speaking softly but in obvious control. The nurses and respiratory professionals were taking turns doing CPR and breathing for the woman. The pulse, BP, and an EKG tracing were constantly flashing on the screen and drugs were being “pushed” into her at a rapid pace. All these professionals were working with level heads and calm in such an emergency, it was inspiring. After 20 minutes of effort, Dr. Hoffman declared that everything that could be done had, and asked if anyone had any other ideas. No one did. She then declared Mrs. Robinson dead. I had witnessed my first death and it all had happened so fast. I didn’t foresee how this would affect me. I always thought of myself as a tough individual; the strong silent type. Yet, with the combination of witnessing this woman pass away, seeing her lifeless body lying on the gurney, and hearing Dr. Hoffman say the word “dead”, I broke down crying.

I had an uneasy feeling in my stomach, the kind you get when an airplane suddenly drops 50 feet without warning. Tears were running down my face and I felt a long way from how I did when the night started. Dr. Hoffman came over and put her arm around my shoulder, sensing how sensitive I was to what just happened. She then asked the scribe to read the woman’s name, Jane Rothman* and age and asked us to take a moment to remember her and grieve in our own way. We then went around the room and each got to speak about how this had affected us, what we think went well, and what we think went poorly during the resuscitation attempt. I was in awe at the presence of mind of Dr. Hoffman and how sensitive she was to me, the patient, and the team. We walked out of the trauma bay and I thanked her profusely for allowing me to witness the resuscitation attempt and for what she did afterward. What she said to me after that is for me only, but I can tell you it solidified my passion for medicine and I knew on the spot she was the type of physician I wanted to be.

I walked over to Dr. Martin and told her I was heading home. You hear people speak of having revelations about life after a near death experience, and now I think I have bit of an idea about what they mean. As I walked out of the hospital that evening, I felt I had an entirely new perspective on my life, my chosen career path, and the world around me. I think I was still in a bit of shock as I boarded the shuttle that evening back to Emory, but I began to think about how important it was to keep in contact with friends and family. How important it was to know as much medicine as I could, so that maybe one day I could save someone, even if they seem hopelessly gone. Seeing our patient pass away that night, well, it motivated me. Although I had not treated a single patient, I felt like I had somehow earned a merit badge; see your first patient pass away, check. Having that moment influence you to study harder, cherish life more, and become a better human being Priceless. I thought I was just there to shadow, but I gained so much more than I could have ever imagined. Thank you to Mrs. Rothman, Dr. Martin, and especially Dr. Hoffman.

About the author: Kevin Olsen is currently a 2nd year medical student at Emory University School of Medicine. He is originally from Boca Raton, FL. When not studying, he enjoys traveling, playing ice hockey, local breweries and the company of good friends.

FROM HOW TO TALK TO SOMEONE COOLER THAN YOU

We all have people that we look at and say to our internal selves “wow, they are so much cooler than I am.” This…