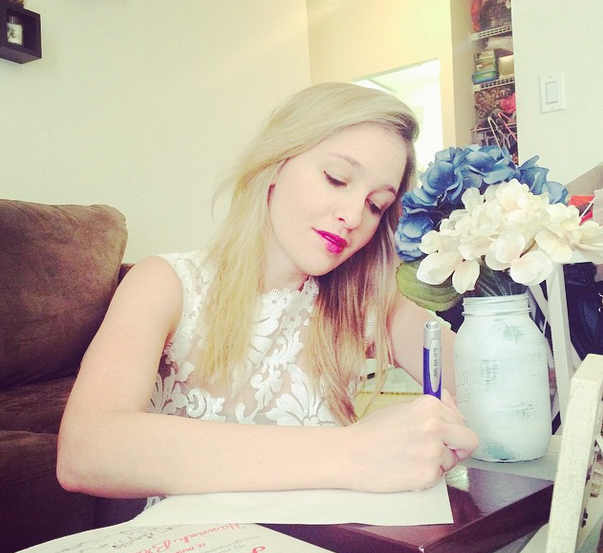 I put it out there to the world.

Send me your address and I’ll send you a love letter.

Sounds crazy? Maybe. But I didn’t think so.

I didn’t really think many people would respond. Maybe one or two of my friends and one or two other people who saw me post about this on Twitter and Instagram and Facebook and said to themselves, “I’m going to send her my address just so she stops posting.”

I’ve always thought the idea of writing something down in a letter and folding it once, twice, and again, and putting it deep inside a flimsy envelope and mailing it around the world was simply romantic.

There’s so many ways to tell people things these days.  We can call them, text them, tweet them, tag them on Instagram or Facebook, whisper it in their ear right before we collapse in their arms or scream it at them at the top of our lungs until our faces burn as we’re standing on the corner of 34th and Lexington.

But even with all those channels, all those ways, we still find it hard to say how we feel. To say what we want. To tell the people who mean the most to us, even the ones who mean only a little something to us, how we feel about them.

This happens to me all the time. I’m the queen of silence. I’m the master of “I don’t know” Or “I don’t care”, when really, inside of my brain, I know exactly what I want to say.

I wanted to tell the cashier ringing up my bag of Chex Mix and my $1.99 morning coffee today that I absolutely adore her baby blue nail polish. I wanted to tell the lady sitting one row over on the airplane that the book she’s reading is one of my favorites. I wanted to tell the girl sitting a table over at the airport, the one who was in tears because moments before she walked through airport security, she broke up with her boyfriend, that she’s brave and beautiful and I admire her. That even though things look really messy, kind of like when you move into a brand new apartment and you just have your whole life in scattered brown boxes labeled with unreadable sharpie, things will slowly get better. You’ll unpack each part of you that has been stored away for a bit of time and soon, I promise you soon, you’ll start to feel at home, with yourself, by yourself, once again.

I’m sick of waiting until it’s too late to let someone know that they are lifechangingly beautiful and worthwhile. To let them know that even through their deepest flaws, they have shaken me in ways that no one else can. People I’ve know for four years and people I’ve only known from eavesdropping on their conversations for fewer than four minutes. 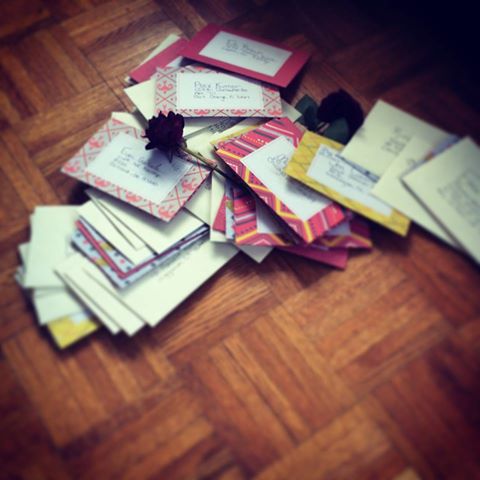 By the end of one week, I had over one hundred strangers waiting for me inside of my inbox.

Some of them just sent over their address and some of them sent over stories. Stories about broken hearts or not fitting in or wanting, desperately, to be seen in a world where people are constantly looking down at some sort of screen. Of not having any idea what to do with their life after they graduate or of people who have already graduated and wish they were doing something else, something even more wild, than the world inside of their cubicle.

I wrote these letters whenever I could. Every letter was different, as was every story. But no matter what prose came into my inbox and out onto the paper, I wanted to tell every single person that they were not alone. That I truly though they were daringly brave for even being able to get out of bed in the morning and feel these things, live these things. My god, people are remarkable.

When I finished all of the letters, I went to a CVS to buy stamps.

“I need to buy around 110 stamps,” I told the lady behind the counter, fishing around in my wallet for the cash to pay for them.

I realized I was probably cleaning this CVS out of their year supply of stamps.  People rarely sent letters anymore – just to send letters. They mailed back paperwork  – when they had to – and sent cards, when they Hallmark or the calendar told them they should. But not letters. Not for no reason.

“I need them to mail the 110 love letters that I wrote to strangers,” I replied.

“Ha, that’s a good one!” She said, taking my money and handing me enough stamps to probably mail the weight of cocker spaniel.

I walked out of CVS and found myself on the very southern tip of Times Square, a place that attracts clusters of strangers from all inches of the world. The place where people come to look upward, as giant billboards flash above their heads and people sideswipe them with elbows and shoulders and backpacks as they walk by. A place, where if you stand still long enough, you find yourself falling in love again, with people, places and things that terrifyingly annoyed you only minutes ago.

A place that makes you realize that people are a mess, sometimes.

Aren’t we all? But that’s okay. We’re getting out of bed in the morning and we’re trying to hold ourselves together, as if we’re life size hot glue guns.

In fact, my dear, I think you are everything.

Ps. I’ll be writing more love letters later this year (when I can afford some more stamps!) – so keep in touch by subscribing below and you’ll be the first to receive a letter.