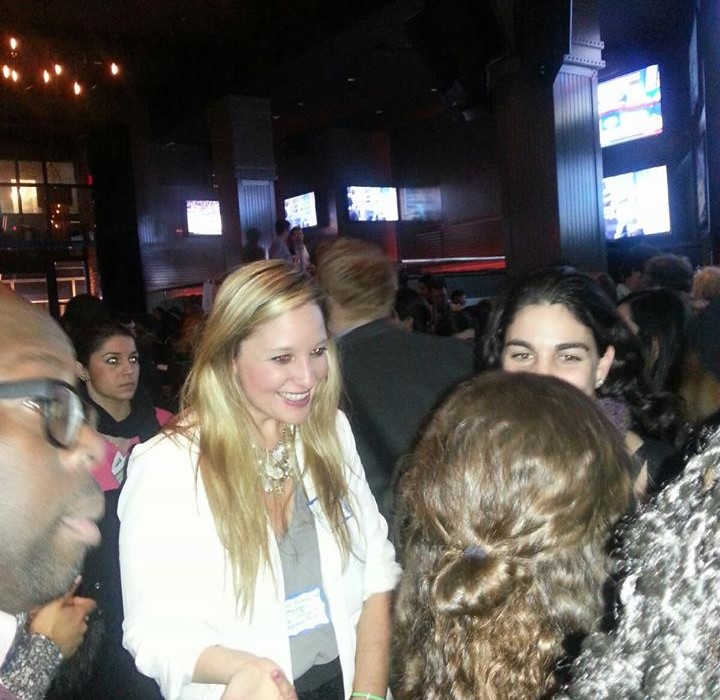 “I can talk for a long time only when it’s about something boring.” ― Lydia Davis

Do you want to know what the scariest part of being In a sorority is?

It’s not suddenly becoming friends with more girls than you’ve ever known in your life, or dealing with fraternity guys who smell, permanently like tequila and stale Doritos, or having to wear matching outfits to things (though have you seen 150 girls all wearing the same t-shirt and white shorts and brown sandals? It’s a little scary).

It’s doing something called recruitment. And no matter if you’re in the most popular sorority on campus or the least, you have to do it.

Well it’s 4 to 5 days of timed conversations with absolute and complete strangers.

All of a sudden, the doors of the sorority house swing open and there they are. A group of 100 girls you’ve never met before in your life. Who are forced to go from sorority to sorority and decide which they’d like to be part of.

I wasn’t in the most popular sorority when I was in college. No. I was in the “new” one. The one with more “down to earth and unique” kind of girls. The one where if we wanted to recruit a new  group of women, we had to work to prove ourselves. We were the only ones without a house on campus – so, for the week, we’d rent out  a falling apart fraternity house  and decorate it with balloons and spray  gallons of febreeze all over the place. 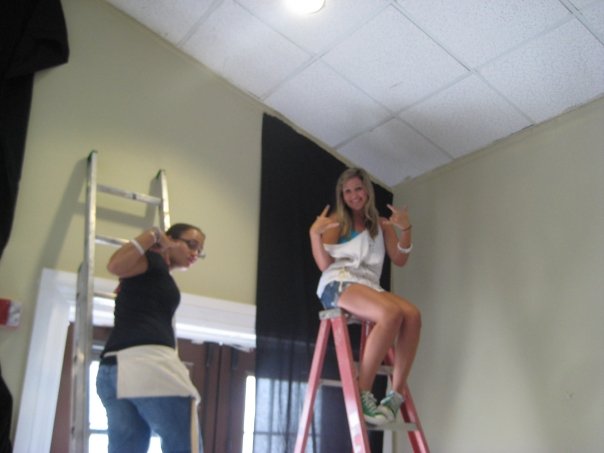 Trying to turn a fraternity house into our sorority palace for a week.

Day one: You vs. a group of 3 girls. You have to speak with them for 35 minutes straight. No cell phones, no distractions, nothing to do but talk. You talk until the music starts to play and then you say goodbye and walk them out of your house.

And then what do you do?

So what do you say?

Well, somewhere in whatever you say, you need to also toss in some props for your sorority and tell them why they should join.

But seriously, what do you say?

It’s frightening and awkward and every single girl in the sorority has to do it. And not just once, every single year you’re in It, this is what you have to do the first week of August. And after a couple of days, when the selection process continues, some of the girls who come to your house are forced to be there. They don’t even want to be there – but the recruitment gods make them go and give you another chance.

Want to know what they do to show us how mad they are about that?

They refuse to talk. They play mute. You’ll ask them how their day is so far and they’ll look at you like you just wiggled around and did a dance. Or maybe they’ll speak. In one word answers. And so either you can do a 35-minute staring contest with them or you can talk. Talk like no one is listening (because let’s face it, they aren’t).

I bet you don’t hear about this often?

Which is a shame because sororities are most-well known for liquor gorging themed parties and hazing incidents. But they are not known for this. The one thing that actually builds extinct social skills in our 20-something, technology obsessed selves. One day, I know, this recruitment process will be out of date and sororities will recruit people like we do dates on something like tinder. Swipe right if this girl looks like a good fit for your chapter. 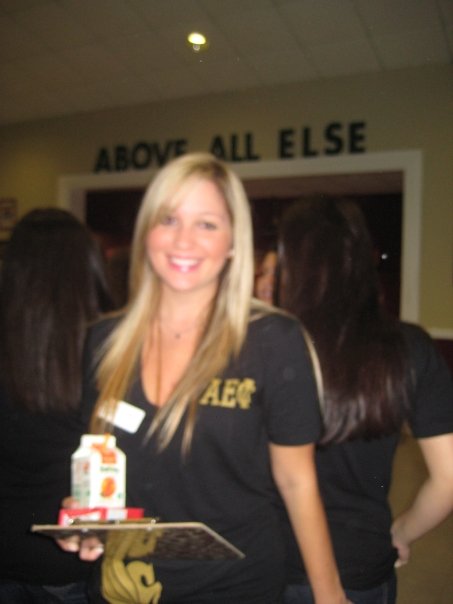 My final year in sorority recruitment

Until then, this process takes everyone – from the shyest girl in the room to the one who could talk to a wall – and makes them do this.

I once had to talk one of my sorority sisters off the ledge. Literally. She was hiding in a bathroom stall, standing on the toilet. Refusing to come out because she was so scared to do this.

Talking to strangers is absolutely terrifying.

Here’s some of the techniques we’re taught in order get through this – which truly apply to real life conversations as well. 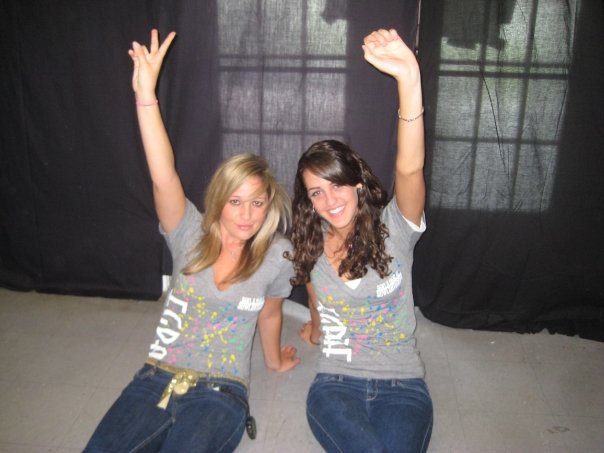 I used to stress sweat so badly during recruitment that I had to wear period pads underneath my armpits.

I’ve done recruitment 3 times in college, and then I worked for my sorority afterward, running recruitment workshops for chapters around the country.

You’d think I’d be a pro at this by now.

You want to know the truth?

I’m not. I still get terrified. Sometimes I go to events alone and want to approach a group of girls but I freeze and I get so nervous that my heart races and I just end up standing 3 feet away from them lurking over their shoulders, wondering if they see me. They do. I know they always do.

Last weekend, I was invited to a conference put on by Cosmo. There were 2,000 women there – all in my demographic. I had to go and speak to as many people as I could about my blog and my book and my business. I packed a gigantic professional looking briefcase with as many business cards as I could stuff in there. I put on a blazer. I brushed my hair. I checked my teeth before I got there for lipstick. I wore a new fur coat – which I realized 4 hours in, I forgot to take the tag off of.

But when I got there, I froze. I couldn’t speak. If I did speak, it was only to say, “Hi, I’m, Jen,” and then the conversation would die. One time I tried this on a girl who was about to sit down next to me and I put out my hand to say hello. But the girl was carrying too many things at once and when I stuck out my hand, I accidently knocked over her half eaten yogurt on the floor. And the whole thing was so jumbled and awkward that she ended up moving three rows behind me because she probably thought I was some kind of clumsy breakfast stealer.

So what did I do?

I took my 4 years of recruitment experience, my briefcase of beautifully printed business cards, and I left.

I walked 5 blocks east to Argo Tea. Ordered a large muffin and an extra-large tea.

I was finally safe.

And of course, I’m saying all of this out loud to myself in Argo Tea and a group of tourists are staring at me. One of them pulls out his iPhone to video my powerful monologue and another one whispers something loud enough  that I hear him say, “New Yorkers are absolutely bonkers.”

Okay, I thought to myself. How can I do this?

And then I remembered this, the best way to enter conversation with someone is to do it naturally. People will get weird if you walk up to them and say, “HI, I’m Jen Glantz. I just talked out loud to myself in Argo Tea about how I was going to come back here and make friends.

Natural conversation forces people to let you in. it’s conversation they are used to, trained for, neurologically wired to respond to. Because if it’s not natural, we’re trained to ignore it, just like we ignore the homeless guy shouting at us that the world is going to end! Or the guy who approaches us as we’re waiting for the subway and says, “Damn, girl, let me show you a good time.”

Ask  a question that makes someone do something to help you. It’s the key to getting any strangers attention, to letting them let you in, to starting that stranger trust.

“Do you girls know when the next session starts?”

That’s how I did it. I walked up to two women and I asked that. We then spoke for 45 minutes, exchanged info, and took a selfie together.

Maybe it’s getting somewhere new, eyeing a bunch of intimidating strangers and having to throw yourself in front of the bathroom mirror to pep talk the heck out of yourself before going back out there and speaking to someone, something, other than yourself. Maybe it’s making someone spill their yogurt or having a group of girls wonder why the heck you’re standing so close to them and not saying anything. Maybe it’s spending your first few days of recruitment, at the age of 19, making every single conversational error in the book. Saying lots of “ummms” and sweating through your yellow cotton shirt so badly, that you start all conversations with, “It’s getting hot in here, isn’t it?”

Maybe it’s a bunch of that before you finally see that the less you plan it out, the less you let yourself get all suffocated with nerves, the more you’ll just go for it.

Toss yourself into the conversation like you’re the keynote speaker.

Believe deep down that you are.

FROM WE ARE THE “NO THANKS” GENERATION

“When did the future switch from being a promise to being a threat?” ― Chuck Palahniuk I try not to speculate too much about the future….