“When you leave home to follow your dreams, your road will probably be riddled with potholes, not always paved in happy Technicolor bricks.” – Kelly Cutrone

Five years ago today, I graduated from college.

Five years ago, I packed up everything with my name scribbled on it and stuffed it into the leather backseat of my car.

My car, that I would later sell for money to use on a one-way ticket to NYC and a three-month lease on a room with only three real walls.

But before that, before the apartment on 31st street across from a pizza shop and a beaten up library with a stiff late fee policy, there was a walk to Bank of America. There was the quick withdrawal of my entire savings account, which I’d use for a trip to Europe and then a move across the country.

There was waking up in the middle of night in a pile of my own stress sweat, having a staring contest with the Beanie Babies on the shelf next to my college diploma. There was my bed from childhood with the sheets I used in my dorm room. There was fast first love and rock, paper, scissor, shoot-like goodbyes.

There was a couple of conversations with friends of friends of friends about jobs I didn’t have enough years of experience for, yet. There was a  conversation at a tiny round café table in the back of Barnes and Noble with about how I felt like I was the only one who couldn’t quite figure it out. There was many eye rolls on top of gushing tears over Facebook posts, over watching a certain friend go to grad school or get engaged, have baby or break ground on a house with two of everything: two garages, two stories, two much space.

People look at you now, right now, and think you have it perfectly together. Think that the photos you snap, snap, snap and run through filters on Instagram indicate that your life is a stream of darling perfection.  Think you have it all figured out.

For all they know, you never fell apart in the arms of a friend or had to look a boss in the eye and break up with them for a job that would pay you1/3rd the money and be something you’ve never done before.

For all they know, you always knew how to get where you are right now. Even if it’s not where you truly want to be.

My last memory of college is of the bathroom floor.

Is of myself, laying there with my hands over my eyeballs and my face chafing against the bright cotton fur of an on-sale Urban Outfitters rug.

Before that, I suppose, there was a conversation with an academic advisor, with a college professor, with the guy from Bank of America-  who all told me the same thing: You don’t need to know where you’re going, you just have to get out of here.

So I remember pulling apart my life.

The gory parts that I spent twenty-something years finally getting the hang of, were now scattered around the floor of my parent’s garage, folded into my overweight, oversized suitcase,  were spilling out inside of half-started word documents that were all saved versions of the same thing, titled: Jen Glantz’s Resume. 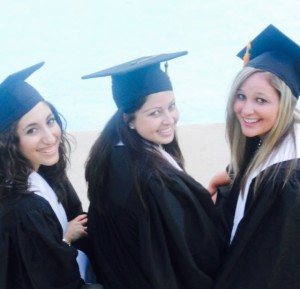 In this exact order:

I took that trip to Europe and ate too many slices of pizza, I moved to Los Angeles to work as a consultant for a sorority, I moved back home. I persuaded a woman who was the publisher of a local magazine to meet me, then to hire me, then to pay me more than $7 an hour. She convinced me that I was only good at doing assistant chores for her, and I did them. I applied for 324 jobs. I interviewed at Google. I interviewed at Forever 21. I told jobs I lived in LA, when they were based in LA, and NY, when they were based in NY. I started, finally, telling everyone the truth. I’m Jen Glantz, I live upstairs in my parents’ house and I started a website because I needed to bang my head against something stable my first year in the real world. I’m Jen Glantz and I want a job where I can write and change the world. Where I can meet new people every single day and speak to them. And also, I am proficient with Microsoft Office – but not really with excel. I saved up every penny I was making working at the magazine for four months. I used $250 to fly to New York for one week over the Christmas holiday and stayed on a couch at friend’s apartments. I convinced 5 companies to interview me in person. Three of them said no, but I went there anyway. Two of them wouldn’t let me more than 50 feet inside the lobby, so I sat there, for a few hours. One of them told me they’d talk to me over the phone, so I did a phone interview in the lobby of their office. The other two met me in person. One job offered me a job – but for no money. Not enough money to live in NYC. So I begged them. I offered to take on a second job there. I offered to do sales for them just to make the commission. They said take it or leave it, so I did. I left. And I started packing up my suitcase to go back to my twin-sized bed on the second floor of my parents’ house in Florida. And on the way to the airport I went on one more interview. At a public relations company and I told them I had absolutely no experience doing PR. But I studied journalism and at my magazine job, my job was to take PR inquiries and put them in the spam folder or write about them. I shook their hand and I left. They offered me the job, but I had to start in a week. So I went home. I packed up everything I owned in two suitcases and two boxes and I went to Bank of America and I withdrew the contents of my savings account, for the second time, and I moved to New York city. I didn’t have a savings account for two years after that. I didn’t like my first job in PR. But I stayed. I learned. I cold-called reporters all day. I had to get creative. I was calling the New York Times saying, I’m Jen Glantz, this is my story about a nonprofit gala where they plan to raise $2 million dollars, and by the $2 million dollar part, I got used to the calming sound of the beep beep beep and the operator saying this call is no longer connected. I got used to emailing reporters 5 times before they would finally respond saying leave me alone, okay? My first day of work there, I interviewed somewhere else. But I didn’t know what I wanted to do anymore. I wasn’t content writing for a magazine or working in PR.  So I applied for everything. I interviewed at AOL. I interviewed, again, at Forever21. And every day for two years, I looked for a new job in New York City. I finally found one. I got one at a tech-start up, as a copywriter and for the first time since graduating college, I learned what a stable job was like with a boss who treated you with respect. I got to write every single day. But I wanted to write more. So I wrote a book. And then I wanted to interact with people even more and talk to them, so I started a company, on the side. 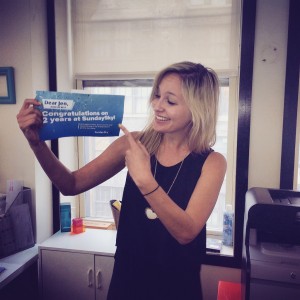 I’m sitting here right now wanting you to know that I’ve never told anybody this, but I think about the day I was on my bathroom floor in college a lot. Because I felt really lousy and alarmed and unsure and I never wanted to feel like that again, yet I’ve found myself in that very place more than a handful of times in the past five years and I just want you to know that the second and the third time become much easier and suddenly you realize it’s not so bad being so completely lost.

I want you to know that I had this feeling yesterday and I found myself laughing because I realized that the greatest things to happen to me in the past 5 years happened to me right after those kind of manically outrageous moments.

People always say when you have nothing, you somehow have everything.

The good news is, they will fall, eventually, into some kind of mangled and jumbled and dysfunctional place.

But they will somehow make sense, like a personal inside joke, and make you laugh and make you realize the key to life is to be resilient and up for a new adventure, always, and totally and completely unsure of who you are supposed to be and what will happen next.

Bet no one has ever told you that, right?

The second you get comfortable with life, life has a funny way of reminding you that that is not the purpose of why you’re here and who you are.

I pinky-promise you that.

I used to wait to make my New Year resolution until the last ten seconds of December 31st. How is that for living on…