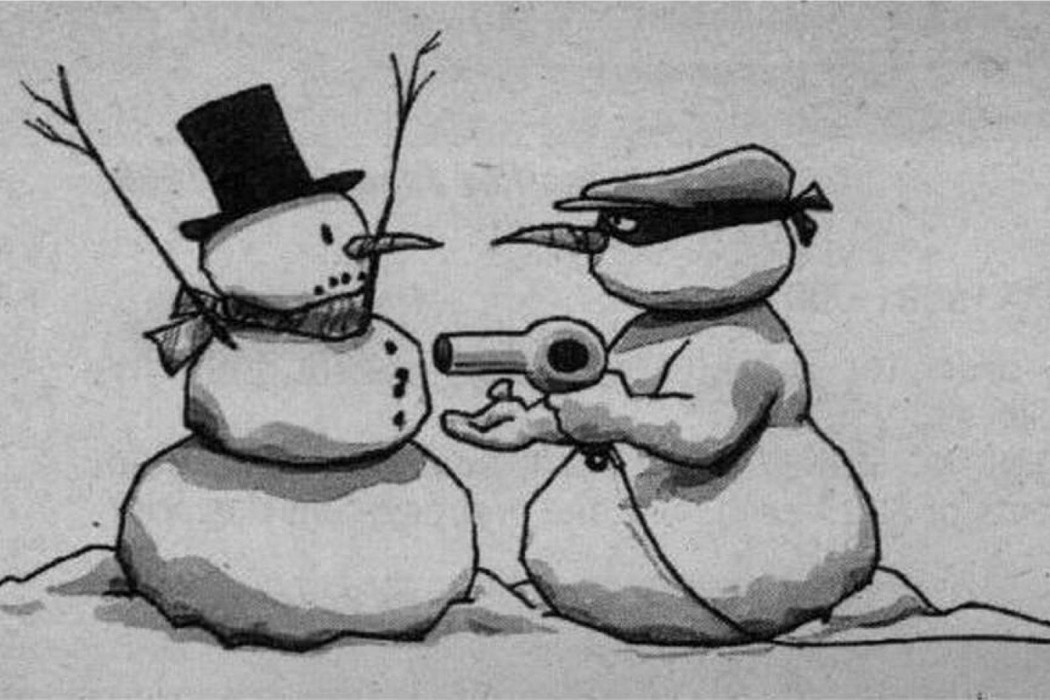 My brother woke me up in sheer panic. As if to tell me we just won a trillion dollars or the Berenstain Bears were coming to visit our home.

I was four. Maybe five. Possibly six. I was still at the age when I wore Minnie Mouse pajamas to bed and my thumb didn’t migrate very far south of my mouth.

“You’re not going to believe what we’re doing today,” he said as I pushed the crud out of my eyes like I was shaking pepper onto a salad. My brother is four years older than me, and back then—and even now—anything he did or said or wanted I had to do or say or want also. It was as if he has the Midas touch; anything he even looked at, to me, was gold.

There are a couple of things you see a lot when you grow up in Florida: old people, early bird specials, hurricanes, and weird people doing weird things in the news.

And there are some things you never get to see, like seasons or something called snow.

At that age, the only knowledge of snow I had was from snow globes people had given me as presents. I would shake them as hard as I could and watch the miniature cotton ball pieces fall so delicately on top of a steady world inside a plastic shell. I imagined what it felt like to have snowflakes fall on my head, to land on my cheeks and to cling on to my skin for only a little while.

Everything that happened that morning was a mad dash rush toward our ultimate adventure. I remember my cousin coming along and the three of us gathering materials around the house to build a snowman. They told me we needed a carrot for the nose, a scarf for his neck, and buttons to make a little outfit on his body.

I remember waiting in line to see the snow for what felt like 4 days but must have been an hour and a half. Bundled up in 80-degree weather, having my mom lather up my exposed skin with sunscreen. What irony this whole thing was—snow in the Florida summertime.

When it was finally my turn, when the time came to enter the playground and have an adventure with balls of ice, a man in some kind of official uniform stepped inches away from my pink Converse sneakers and said, “I’m really sorry to tell you this, but the snow is all gone. It has melted.”

“How could this be?” I tried to say but just stood there in tears instead. I couldn’t even begin to understand that snow—or this fake ice wonderland they unloaded from a pickup truck—couldn’t last in 80-degree weather.

When everyone was walking out, we went in anyway. We felt the ice, which was now water, running for shelter in the moist dirt. And we picked up clumps of dirty sand and made what we could. He was a pathetic looking Florida mixture of a creature, but he was ours.

You wake up. You brush your teeth. You put on some type of uniform—whether it’s for work, or school, or the weekend—and you do what you have to do to make sure things fall into place.

Here’s the thing that we often forget, though.

You should live—you should look at life like you used to when you were 7-years-old and had a pile of Legos resting beside your knees or a serving of steamed vegetables that you would instantly use to build an intricate fortress on your dinner plate. You should take the grown up problems, that amount to some kind of to-do list, and you should let your imagination infiltrate them.

Because if not, life, or the situations that suffocate you with stress will become epic disasters or just plain old boring. Because why let your last great adventure be when you were a child and everything was first a playground before it was what it really was.

Today, that brother who woke up my imagination when we were just kids, celebrates his birthday. I still wish i could look at the world with the creative lenses that he does. How he takes something that everyone else would see as gray and make it burst with the most immaculate colors.

No matter how old we are.

Subscribe to The Things I Learned From & receive a Monday morning email (with new posts + fun tips) that’ll help you drag your butt out of bed! Just type your email in the box on the right side of the page! Oh…and…

FROM A NEW YORKER’S RELATIONSHIP WITH THEIR AIR CONDITIONER

“And so with the sunshine and the great bursts of leaves growing on the trees, just as things grow in fast movies, I had…