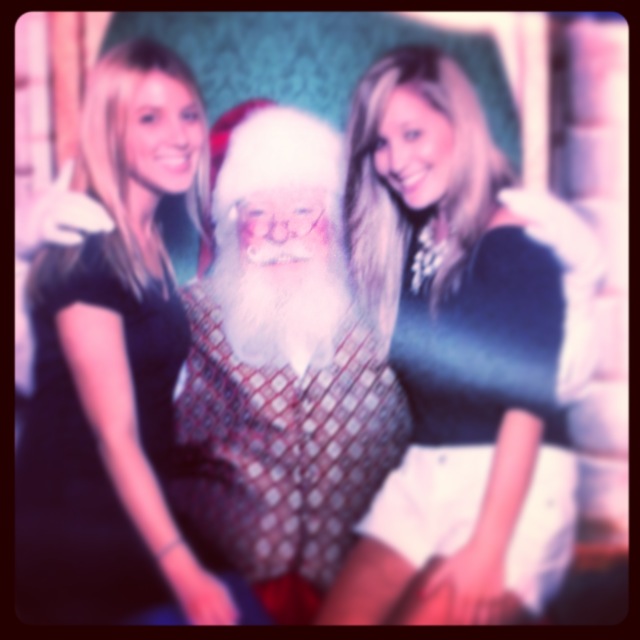 “Christmas is a major holiday. Hanukkah is a minor holiday with the same theme as most Jewish holidays. They tried to kill us, we survived, let’s eat”–Anonymous

My name Is Jennifer Sara Glantz. You may scratch your head in fatigue and wonder about why my name does not sound familiar, or why you’ve never seen my name on a naughty or a nice list, and that’s because I’m Jewish and in my culture the only list that has value is the food shopping list for the deli before a Friday night Shabbat. See, before today, I’ve never written you a love letter nor did I speak about you much and usually around this time, after my 8 nights of getting lucky thanks to those Maccabees, I referred to you as “He Who Will Not Be Mentioned.” Maybe you remember me, and my house, as the one smelling of matzo ball soup preciously sandwiched between two outrageously decorated houses that smelled like peppermint bark and cranberries.

This year, I found myself smack down in the middle of the modern day Wonderland, New York City. I found you don’t have to celebrate Christmas, but to live here, you have to give in a little. Meaning that no matter how hard you resist it, you’ll find yourself somehow draping your apartment in Christmas lights for extra, added, “light and warmth”, or you’ll go out one night and end up walking home with a newly acquired Santa hat, fingering the edges of beat up mistletoe. Everyone here is in some kind of jolly spirit. Even the muggers and the homeless will wish you a merry Christmas before they wish that you’d give them 47 percent of your paycheck. Tourists with bedazzled fanny packs crowd the streets and bump into you with their fuzzy-wuzzy sweaters while they click their heels “fa la la la laing” and ooze over those Rockettes who like to kick it.

After finding myself, 8 days post-Hanukkah, suffocated by chunks of wrapping paper and nails clogged with multi-colored wax from the menorah, I got my latkah stuffed buttox off the couch, and tried to blend in a bit more. You’ll be proud to know, that I refrained from elbowing strangers as I strolled down 5th Avenue today trying to take a glance at those Holiday window displays. I let the old lady that was jabbing the back of my knee with her cane, cut in front of me during Black Friday shopping. And, when I called the bank to find out why the heck they were charging me an extra Benjamin this month, in what they call “not hidden hidden-fees,” I wished them “Happy Holidays” instead of telling them to go… well, you know what I wish I said.

For what it’s worth, I believe i’d belong on your “Nice Jewish American Princess” list. That is, if you’re willing to put aside the unattractive things I did this year in the name of “YOLO” like my collection of selfies or the time I sang “Hot in Here” by Nelly during a karaoke work event. Don’t worry, my Bubby guarantees me I’ll feel the Jewish guilt for these actions for quite some time during 2106.

You’re probably really tight with our mutual friends the Tooth Fairy and Passover’s Elijah, which I’m sure can vouch for me that we have a pretty solid friendship. After that fairy stole a tooth, I always left her a sticker from my Lisa Frank collection under the pillow. And every year, I always leave Elijah a chocolate covered Macaroon next to his glass for whenever he decides to show up. I’d do the same for you, Santa.

So how about you pop in tonight and perhaps, over a dish of Moo Goo Gai Pan from the China Town, I can tell you about the four feature films I sat through while picking popcorn out of my dentures at the movie theater or about the Matzah Ball (a Jewish singles party on Xmas eve) that I attended where the guys just wanted me to light their Menorah’s and play find the Akifokem with my fragile, potato pancake heart. One guy even offered to take me on a date with a 50% off coupon he scored during a raffle at work and another, I hadn’t seen since he gave a very pitchy rendition of his Torah portion during his Bar Mitzvah.

Let’s get crazy, santa! I’ll tune up my guitar and we can jam to some Hava Negilah mixed with Silent Night and make a Mashup, kind of like the one Taylor Swift did with Lil Wayne. (You’ll be the T. Swift in this duet, since you’re perfect).

PS. I left you a plate of hamantaschen and a glass of warm manischewitz wine. Please take one on your way out, or else my grandmother might get worried that you’re working on an empty stomach.

PPS. for best taste, just whipe the first layer of freezer burn off the top. For all i know, these cookies have been hanging tight next to the pastrami in the freezer since March.

“We need, in love, to practice only this: letting each other go. For holding on comes easily; we do not need to learn it.”…