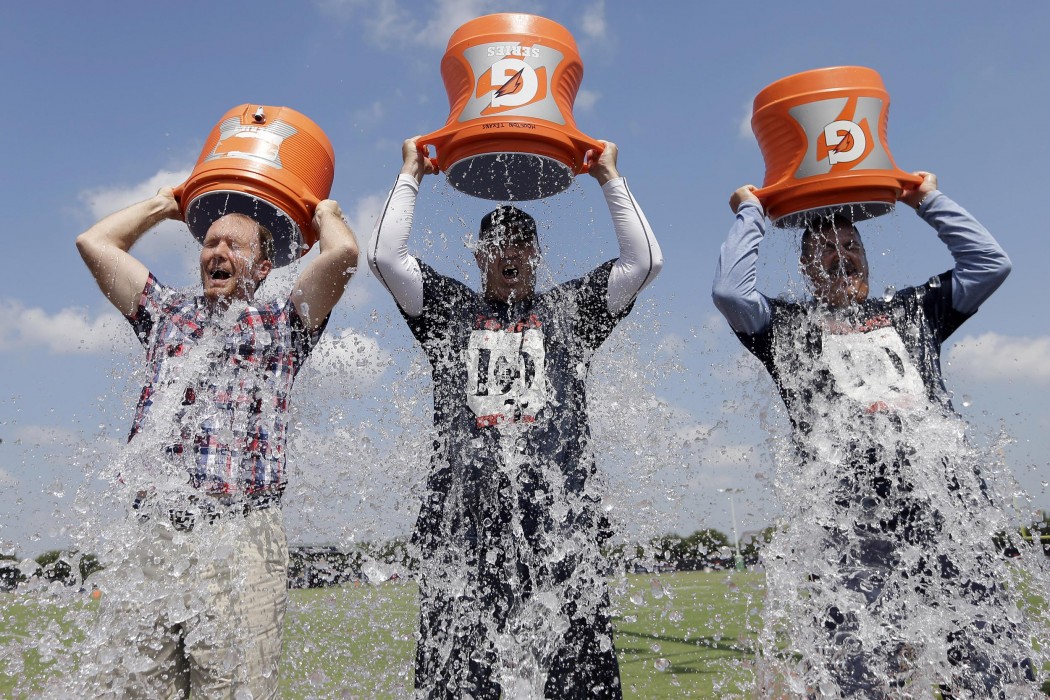 “I would say happy new year but it’s not happy; it’s exactly the same as last year except colder. ” ― Robert Clark

There were a couple of things that snuck back into 2014 from the year 2013 – like the overwhelming amount of selfies we take and post and hashtag with a myriad of unnecessary and apparent things, like: #HePutaRingOnIt (obviously he did – or he just brought you to Kay Jewelers and made you try on a ring as a cruel April Fool’s Day Joke) or #TBT on a photo that looks like a younger, less stressed version of your 20-something self-doing something you no longer have the time or savings account to do – like jumping off a cliff in Croatia or buying organic fruit at the Farmer’s market.

Luckily, things like Gangnam Style and Miley Cyrus’s tongue were overshadowed by some of the remarkable and bizarre things that swept in and made 2014 the year that it turned out to be.

It was a genius idea to help raise money for ALS – yet the majority of the people who filmed themselves “o00ohing and ahhhing” as a bucket of ice water flopped on top of their head, probably can’t tell you what ALS stands for – or what the disease actually is.

As if we all needed another reason to fear crowded public places or recycled air on airplanes or swapping siliva with absoulte and complete strangers.

I’m eager for the day when just writing out those three words doesn’t trigger a whole song and dance routine inside of my head. I want to be able to say or think those words without having my inner Idina Menzel climb to the surface.

Starting fresh doesn’t apply to your credit card bill. You know what a nice gift would be? American Express emailing me to say, “Thank you for paying as much as you could this year. Let us take care of the rest!”

Time Warner does a good enough job of keeping my internet at a steady level of almost always being broken. There’s no need for Kim K’s gigantic assets and photoshop waist to try and add to that.

6. Speaking of Butts…Songs About Butts

There was a 5 year old boy on my plane screaming out “You know what to do with that big fat butt. Wiggle, wiggle, wiggle.” Thank you for this butt song, Jason Derulo.

The world truly has a place to turn when they want to know what hitting rock bottom sounds like  – especially when you’re limited to showing that off in 140 characters or less.

Because I’ve only been twice this year.

No other celebrity death has made me feel this upset and embarrassed to be wearing last season on-sale pants from Bloomingdales all in one day.

Drunk in Love is the kind of song that you listen to over and over again and wonder if singing these lyrics in front of your 83-year-old grandma is appropriate.

Allison Williams – stick with Girls in 2015.

12. My Love/Hate Affair With Taylor Swift

I promised myself I’d never enjoy listening to Shake it Off – and then I found myself listening to it 17 times on YouTube, learning all of Taylor’s dance moves.

It’s only getting worse. There’s a dating app where you can swab your mouth and mail it in and the company will match you with someone else who has similar DNA. There’s a dating “on demand” app that sets you up on a date with another local single, anytime – anywhere. It still makes me a big uneasy that you can search for love while you’re answering emails at work, grocery shopping, or in the bathroom.

Most of these are saved as incomplete sentences in my gmail draft folder.

FROM CARRY A POEM IN YOUR POCKET DAY

“I don’t know. Poets are always taking the weather so personally. They’re always sticking their emotions in things that have no emotions.”–J.D. Salinger I…