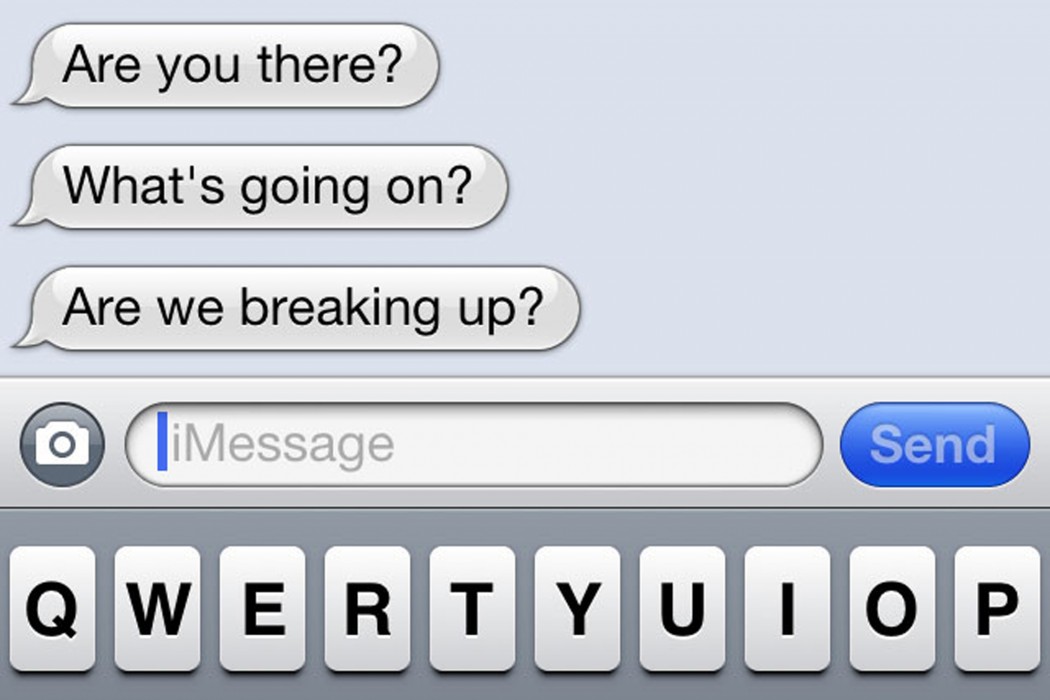 “Two words. Three vowels. Four constenants. Seven letters. It can either cut you open to the core and leave you in ungodly pain or it can free your soul and lift a tremendous weight off you shoulders. The phrase is: It’s over.”
― Maggi Richard

Most of us have said it before — and most of us will probably say it again. “It’s not you — it’s umm — it’s me.” Or, “I’m just not looking to be in a relationship right now.” It’s hard to call it quits with someone we’ve been dating. It’s also, sometimes, even harder to call it quits with someone we’ve only been on a few dates with. There’s no easy, painless way of doing it. There’s not a one—two—three band aid trick that’ll make us feel good about ourselves for breaking up with someone else. But when it’s not right or when it’s gone spoiled we are left with no choice.

A few weeks ago, I wrote about how someone I was goo-goo eyes for broke up with me over a text message. He might as well used a post it note (circa Sex & The City) or left a message with my doorman. But I was glad to see I wasn’t alone. Other women I spoke with had been in the same position. Getting broken up with through mix tapes or after dinner with his parents.

Today, the tables have turned. It’s time to hear from the guys. The ones on the other end of the text messages, voicemails or in-person “This just isn’t going to work” banter.

“The relationship I was in prior to the last one ended strangely. After going through a bad area for cell phone signal, I got frustrated by the fact that I couldn’t hear her. Using the old Verizon slogan (Can you hear me now?) in an escalated tone, she accused me of yelling at her. Within two minutes, she said things weren’t working out and decided to break up with me.” Paul, 35.

“I was inside a meeting at work and my phone went off. We had just celebrated our six-month anniversary and were in talks to go skiing in a month. I looked down at my phone and there was a text message from her saying we need to talk. I asked her to talk now. She just wrote that she wanted to go on a break. The worst part of it all was she ended it with an Emoji.” Michael P., 28

“A few months before my high school graduation, I received a lengthy Facebook message describing how a girl I was seeing could not be with me anymore. It detailed out how much I meant to her, how much she enjoyed seeing me, and how much her friends and family liked me. We stopped all communication and went our separate ways. This was easy because we lived about 25 minutes away in separate cities. Roughly two weeks later, I was at a friend’s house when he noticed that she was “in a relationship” with a someone on Facebook. I haven’t had any type of long-distance relationship since.” Sam, 24.

“A year ago I went on four dates with a girl. Things were going well or so I thought. Until one day I tried to set up something for the weekend and sent her a few text messages and called her, but I heard nothing back. She ended things through silence, which in a way was worse. She had me on the edge waiting for a response and I wasted so much time and energy trying to chase her. I would rather her just say, “I’m not into you,’ or something.” Joey, 25

“The breakup happened in reverse. I tried to tell her I was done and she texted me back saying no, I’m done. It was a classic case of her trying to get the last word. I let her have it because when it’s over, it is over. I’m glad we are done. Even if she had to be the last one to say it.” Lucas, 27.

Subscribe to The Things I Learned From & receive a Monday morning email (with new posts + fun tips) that’ll help you drag your butt out of bed! Just type your email in the box on the right side of the page!

Shark Week, you bring out the worst in people. When the two week mark hits before Shark Week begins people start getting prepared–as if there was…