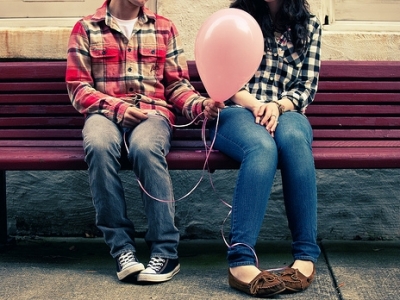 “Love is where you find it. I think it is foolish to go around looking for it, and I think it can be poisonous. I wish people who are conventionally supposed to love each other would say to each other, when they fight, ‘Please-a little less love, and a little more common decency.”
― Kurt Vonnegut

Below is a chapter from Jen Glantz’s newly released e-Book: ALL MY FRIENDS ARE ENGAGED. It’s available now on Amazon & iTunes.

A List of Awkward Things That Have Happened To Me On Dates:

1. We’re at a Mexican restaurant and my date pauses from stuffing a burrito in his mouth because he feels something thick oozing from his nostril holes. Is my nose bleeding? He asks. It’s not bleeding, it’s gushing. It’s splatter painting the mushy rice that’s getting all cozy with the beans and the guacamole of his meat-in-a-blanket burrito.

How I handled it: No, I don’t think so? I said, because I didn’t know what else to do. This is what I get for being smack down in the middle of a debate over whether or not ObamaCare is really, actually, a good thing. If rule #346 in the dating manual is don’t bring up politics on a first date, rule #347 should be when your date asks if there’s a Niagara Falls of blood drooling out of their nose, don’t lie.

When I should have: Offered him a jumbo tampon from my purse and stuck it in his nose to clog the mess that was beginning to stain the crisp white tablecloths at this fine dining establishment.

2. The restaurant is cash only. He has a five-dollar bill and I have about $ 1.37 in spare change that has gum attached to it from living on the bottom of my purse.

How I handled it: Mushed together his and mine, threw in a Bed Bath Beyond coupon and bribed the waitress that if she let us off from paying the reminder $ 35.62 that she’d have unlimited karma points, and in a city that works off that voodoo it could really come in handy. Especially when you’re trying to catch the 6 train or walking to work in the morning trying to avoid a cab splashing water on your white work pants.

When I should have: Stayed quiet. Kept the coupon my mom mailed me for 20% off a new vacuum and offered to hit up an ATM for my share of the spaghetti that I devoured during our little Lady and the Tramp shindig.

3. Our date is coming to an end, and right as I go to put my second lanky hand through the arm of my jacket, I knock over a row of full, half full, none of them were empty, wine glasses.

How I handled it: Said I’m sorry over and over and over again that it sounded like I was making a dubstep track and then, I bent down and started collecting the pieces of sticky broken glass. All while my date started to tip toe out the door, pretending he didn’t know me.

When I should have: Screamed Opa! or L’Chaim!

4. I’ve got my arms around a really good looking guy, as we’re watching the sun fall asleep on Sunset Avenue, when my shoe gets stuck in the crack of a sidewalk and splits open.

When I should have: This was just a lose-lose situation that would ultimately leave me barefoot and alone.

5. We’re at Salad creations and my date is on his phone the entire time. But not to check his Facebook or text his mother or play a round of Candy Crush, he’s in the middle of a 35-minute conversation with someone else.

How I handled it: Swirled the remaining vegetables in my bowl together to form funny faces until it was time to leave.

When I should have: Pulled out my phone and called him. Assuming he’d accept my call, I would have then asked him if he’d like to hang up with whoever was on the other line and actually be on a date with, hmmm, I don’t know, me?

6. In the middle of drinks at a Speakeasy in the Lower East Side, my date turns to me and says, Wow, Jen, you’re way smarter than you look.

When I should have: I’m still trying to figure this one out. Really.

FROM WHY YOU CAN’T JUST WALK BACK INTO MY LIFE

Let’s go back to then. The phone call. There was pizza in my hands and there words pouring out of my mouth about how my…