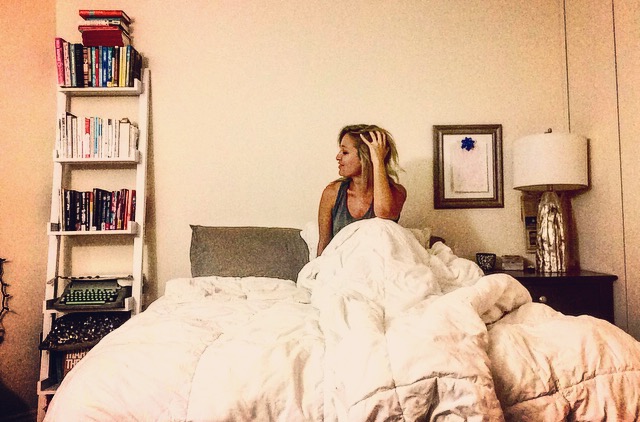 Every once in a while, I wake up in the middle of the night and feel like I can’t breathe.

This is not a reason to alert the troops, and by troops I mean the doctors. It’s nothing serious. Plus, I don’t have good health insurance, so it would probably cost me about $876 just to tell someone with a stacked wall of framed diplomas and a list of acronyms after their name about my problems. I go to the pharmacist at CVS or a psychic when something is wrong with me. It isn’t so bad.

But nothing is wrong with me. I pinky promise.

I only feel this way when, sometimes, I wake up in the middle of the night and eyeball every inch of my NYC bedroom, that’s the size of most people’s linen closet, and see that I have too much stuff.

I’m not talking about having stuff stuff, like too many pairs of shoes or a pile of cashmere sweaters from JCrew. Most of the items of clothing I own add up to cost less than a pair of Jimmy Cho heels. The kind of stuff I hang on to is different. There are piles of i’ll pay you later bills, tangled up necklaces that I got from Claires in the 9th grade, stacks of those free magazines they hand you before you take a ride on the subway.

I hold onto everything these days.

But not in a hoarding way. Because once a month I wake up in the middle of the night feeling like I can’t breathe and I walk to the kitchen. Once i’m there, I pop a piece of frozen chocolate in my mouth (my adult pacifier) and I grab a handful of garbage bags. I start throwing every single thing away until I can see my floor again.

Okay fine, i’m like a hoarder with a deadline. I sulk, bask, enjoy my mess until I get that midnight urge to throw everything away – even the bills I should have paid in January.

But this time, I decided to clean out some of the monsters underneath my bed, that actually now live in my nightstand, that actually aren’t monster-monsters, but more like souvenirs and love letters and birthday cards from people no longer in my life.

Some of those people left before I wanted them to. Others, I kicked out. Most, just tip-toed away with time, and distance, and grown up problems that seemed to get in the way.

Either way, I can’t let these things go.

I’m on round 5 of this middle of the night binge cleaning session, this year, and I haven’t dared touch those things. I know that letting go only brings more amazing things into your life, just like I know that pizza cures everything and the pharmacist at the CVS on the corner of 3rd avenue and 15th street hates my guts…because I ask her about my guts…all the time.

But so what? Do we have to trash those memories just because we let go of people or they let go of us? The physical memories we stuff in our sock drawer, underneath our 2015 tax returns, in between the pages of books we’ll probably never open up again.

I don’t know the answer to that.

I’ll be honest. I picked up a handful of that stuff and I sat on the floor for a good 15 minutes. I should of just shoved it in a trash bag and sent it down the garbage shoot. I shouldn’t even be telling you about those haunting treasures I still have.

But I am because I still have them. I put them back where they belong, which is in places that make no sense to store them, and I continued throwing out newspaper articles and mis-matched pairs of socks.

One day, or one night, i’ll trash those things because my apartment is tiny and I have a good feeling that that stuff is the real reason I wake up when it’s dark out and scrub the ground.

But until then, I’ll sneak that stuff an occasional side glance, because maybe it’s okay to hold on, still, just a little bit to things that no longer have a place in our messy beautiful lives.

FROM PLEASE DON’T EVER CHANGE

“Certain things, they should stay the way they are. You ought to be able to stick them in one of those big glass cases…