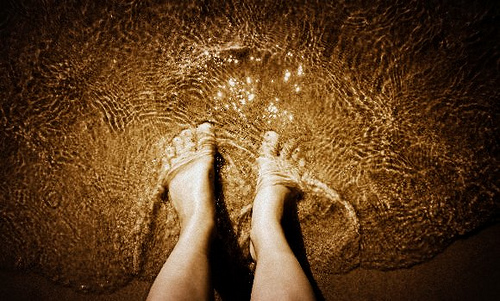 Let’s go back to then.

There was pizza in my hands and there words pouring out of my mouth about how my first week at my new job was. To me, there was nothing wrong between us. But before the cheese turned cold and before I had the chance to tell you that my new office has windows overlooking 7th Avenue, you cut me off. You said, out of nowhere, that you wouldn’t be flying the 2,067 miles to come see me in June. And before I could muster up some kind of logical response, you threw in an “Or ever.” Which was followed by a series of “I don’ts” and speaking of you and I and love and me in the past tense. I dropped our call and my slice of pizza onto the sidewalk and never heard from you again.

There was silence. Shhh. Do you hear that? I’d ask myself as I checked my phone minutes and hours after our last conversation. I swear I felt my phone vibrate. I swear I saw the screen light up. It’s amazing what we can swear we hear, we feel, we see when we’re flirting with silence for what feels like forever.

It feels like those few seconds when you’re on a rollercoaster and you’re starting to climb up and up and up the track and you don’t know what you thought you knew and you start to go a little bit mad because you’re somewhere in the middle of the past and the future and the present is just a big ol’ question mark or a series of ellipses that remind you of the Three Blind Mice. But then, silence turns to reality and reality turns to learning to put on a clean pair of pants and brush the pizza crust off your chest and turn off the Apple TV and get over it. That, my friend, takes time. It takes the same amount of time as it takes to watch an entire season of Mad Men and half of Breaking Bad. Add in a few major holidays and three different seasons.

But here we are. Now. You’re knocking at my Gmail inbox. You’re brushing the dust off my phone number and suddenly thrilled to use it again. As if. As if. As if…

I’m just some draft on Microsoft word that you were happy to find auto-saved.

Or a pint of ice cream you stuck in your freezer and just discovered the other night when you were hungry and lonely.

Or a coupon your mom reminded you to use before it expired.

Or the best thing that ever happened to you.

What I’m trying to say is:

I’m finally over the “I don’t love you anymore” and the silence and the constant wonders of what the heck you were doing in the year we didn’t speak and why it wasn’t with me.

What I’m really trying to say is:

No. Now. You can’t just walk back into my life.

FROM WHAT ARE YOU GOING TO DO AFTER YOU GRADUATE?

“The truth is you don’t know what is going to happen tomorrow. Life is a crazy ride, and nothing is guaranteed.” – Eminem I…