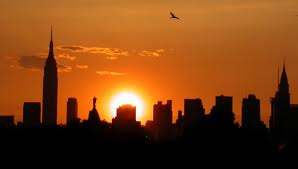 “New York is strange in the summer. Life goes on as usual but it’s not, it’s like everyone is just pretending, as if everyone has been cast as the star in a movie about their life, so they’re one step removed from it. And then in September it all gets normal again.”
― Peter Cameron

But not in an I think you’re sexy and can’t stop thinking about your disgustingly perfect body kind of way.

In more of I seriously can’t stop the oozing of sweat that’s drip-dropping from my arm pits and I’m about to go on a first date and now I have to stop at the grocery store to wedge my under arms in the freezer so that when this charming guy goes to hug me hello, all this perspiration doesn’t form a massive puddle on his Brooks Brother shirt kind of way.

Which is where I am now; hugging on to a sack of frozen Green Giant vegetables and typing this feverishly on my iPhone, feeling so, oh my god, so good.

People are starting to stare. People are outrageously jealous, here, in the summer.

Everything’s moist. Does that word make you cringe?

You might think: oh, what a marvelous time you NY’ers get to have in the summer. Taking your overpriced, fabulous lives out in the open during these months, nibbling on some bruschetta and popping open bottles of expensive champagne, at noon, in SoHo.

But here’s what it really looks like: within minutes, the tomatoes will turn into some V8 juice looking substance and slip off the squelchy toast and the precious bottle of champagne, the one that costs more than my electric bill, will turn the temperature of a Mocha latte from Starbucks. Beads of sweat will start to rage on your forehead and you’ll begin to smell something. Oh, this game is always so much fun in the summertime!

Guess that smell; which is usually, always, just a wild concoction of stranger’s body odors wafting through the city streets, attached to them since they rode the subway and innocently body rolled up against a crowd of people.

Most of your conversations will mesh around the who/what/where/when/ or how to get up on a rooftop, inside a pool, underneath central air, or a weekend getaway to the Hamptons.

But those without the people/places/or money for things, will spend their weekend trying not to accidently lick sweat off a tourist while trying to explore one of those outdoor hot spots that they can’t fraternize with during the rest of the year because it’s too frigid outside. Or, buying a gallon jug of water for $.179 from CVS, standing on the corner of 34th and 6th avenue, and pouring it over their head—pretending to be underneath a flowing waterfall in Costa Rica.

If you’re lucky, and I’m talking being able to eat from one of those Halal street carts and not getting sick lucky, you’ll be standing on the street corner at the right moment and you’ll suddenly feel a breeze. And maybe it’s because the guy in front of you just passed gas. Or maybe it’s from the from the oscillation of wild hand gestures the cab driver is throwing at you from this window, trying to tell you back away from the curb.

But, it doesn’t matter; it’s summer and it feels so good.

FROM MY Q&A WITH A MISS AMERICA CONTESTANT

There are dreams that our  thumb-sucking, baby food eating, diaper wearing selves try to crawl into at a very, very young age. I remember wanting…