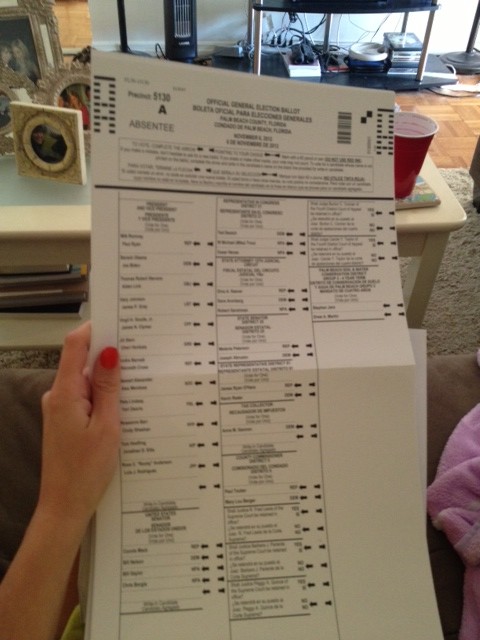 “Half of the American people have never read a newspaper. Half never voted for President. One hopes it is the same half.”–Gore Vidal

There are two things that boggle my mind about election day.

First, election day reminds people that they have opinions and that they can do something about them (If, they indeed, get off Facebook and do something).

And second, that it’s easier to vote for American Idol than it is to vote for the next President of the United States of America. If people had to wait in line to cast their vote for my boy Clay Aiken, would they? Not a chance.

The only other time that Americans wait this patiently on lines is when they are waiting for Apple to release a new toy, or for a free burrito at Chipotle or for whatever it is people wait outside for on Black Friday.

What if we could vote from our computers, through a text message, or hell0–why is there not an app for that? I’ll even take it one step further and beg the question as to why the heck Siri is not able to just vote for us? She practically can do everything else.

Voting can be such a drag. We actually have to untangle our cankles from the couch and put on some pants to wait in a never ending line. And for those of us who no longer roam around in our registered states, we have to muster up the courage to locate a $1.50 worth of postage and do the outdated activity of interacting with a mailbox.

I have to argue that while it would be nice to vote in my pajamas or pick the next Pres. by thumbing away at my cell phone, there is this warm, cinnamon bun, feeling that floods our tummies  as we stare at the back of a head of some balding stranger, hour after hour, standing in a single file line to spend a couple of minutes swing dancing with a voting machine. All while knowing that our to-do-lists are growing, our inbox is filling up to capacity and that the world is going on and on without us, as we take some precious time out of our Tuesday, once every 4 years, to express ourselves and what we desperately wish for our futures.

Technology has the power to do lovely things in such a simple and easy way, but sometimes getting up, going out and going through a process  is proof that we are still strong, powerful, functioning human beings.

So here’s my advice for whoever does not get lucky tonight: try to get on Dancing With The Stars, or a stint as the next Bachelor, maybe, just maybe, you can somehow maneuver your way into the Kardashian Klan? Surely you’ll have more luck woeing America while they sit on their fluffy couches and cast a vote in your favor via their Ipad or just the good ol’ American way–shouting at their televison screen.

Note: Don’t forget to subscribe in the pretty little magenta box, on the top right of the page, on your way out. I promise not to spam you or make you wait in any long lines to read next week’s blog. You can read it leisurely, from the comfort of your own snuggie.

“Sometimes I think the difference between what we want and what we’re afraid of is about the width of an eyelash.” ― Jay McInerney…