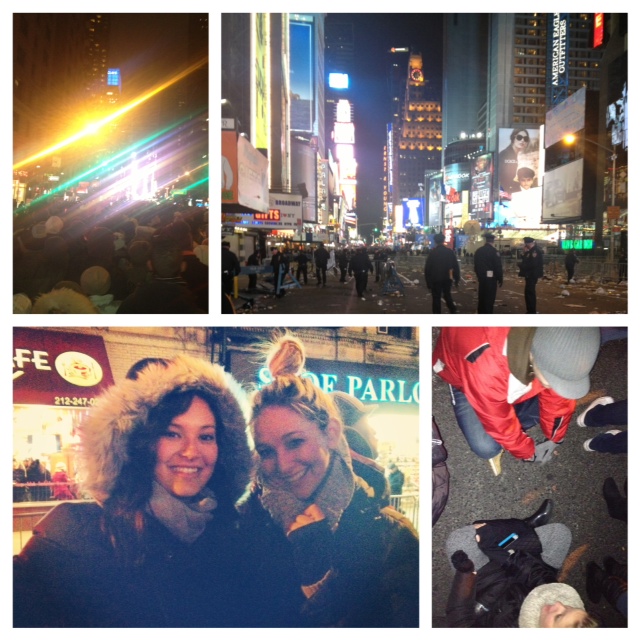 “A New Year’s resolution is something that goes in one year and out the other.”–Unknown

Exactly one year ago, while most people were plotting how to get their post holiday buffet butts off the couch and onto a treadmill, I tore apart my entire life. In a matter of hours, I quit my steady job at a Magazine in Florida, accepted a new job in NYC, found a semi-random roommate, and signed a lease for an apartment I had never seen, in a city I had visited just twice before. I found myself, on midnight, crawling through piles of to-do lists and smooching the unadulterated anxiety that in less than two weeks, I (a girl who had never seen snow and was infamously known for being a winter-hater) would be moving to the arctic tundra. To a city where people got lost and never found, for days, weeks, their whole lives. A place that warns us of the damage that will occur if we go to sleep too early, if we don’t push ourselves, stare chaos in it’s tea cup eyes and decide to do nothing.

Because the chaos that weaves through our lives doesn’t ever fully stop; it’s what keeps our heads above the water. It’s what keeps us afloat.

That’s what I was telling myself, whispering out loud through my chattering teeth as I stood tush-to-tush with strangers for hours, holding in their pee (barely holding in my pee), as I spent the last evening of 2012 in Times Square. A tradition that draws a crowd of one million people who are eager, just like bouncing monkeys, to dance, and to shout, to hold each other under bright lights and one ton of confetti as a gigantic Lady Gaga looking ball drops in front of their freezer burn faces. We stood together with shivering teeth and noses running with snot turning into icicles.

By 8:30 pm, I wanted to call it quits. I could no longer feel my itty-bitty toes and my bladder was starting to hit that 3/4 full mark. I was sandwiched between the pushy elbows of someone from Turkey and the unnecessary baggage of someone from Idaho. I was fully immersed in it all. Smells of food, people peeing in their pants, babies in a state of misery I desperately wish I could get away with at this age, rowdy crowds of hungry and antsy human beings.

But instead of giving up, I gave in.

Dancing beside a family of 5 to keep busy, to keep sane, and most importantly to keep warm. Exchanging life stories, told to me in broken English juxtaposed with beautiful accents. Learning about people, their places and their things has the ability to make 9pm flirtatiously flow into 10pm, making time pass and strangers become friends, long lost soul mates, inspirational figures that you may never see again, but whose words will smoothly carry well into 2013.

If I wanted to get through spending New Years Eve in Times Square, an occasion half of the people I know batted their eyelashes at me and told me I was crazy for attempting, I had to let myself go. And if you, my friends, want to make it through a New Year, a new list of resolutions, changes, discoveries you want to make, I suggest you do the same.

If you want to lose those 17 pounds, quit your awful 9-5 job, be more positive, more adventurous, more forgiving, more loving, less shy, more open to change, stop eating pizza (I don’t know why anyone would want do that?), give up soda, speak to your family more, first you must reveal in the clutter, appreciate your past, your wrong-doings and your mistakes. Check your fears, your lazy tendencies, your needy temporary cravings and then, let go. Throw your hands up in the air, scream with the crowd.

And if you don’t, if by January 13th you’re back to eating your body weight in carbs and still working at that job you desperately dislike or still spending too much money on clothes when you vowed to stick some change in your piggy bank, It’s OK. Resolutions stay unchecked off our lists, with the best intentions, like how sometimes our shoelaces dangle on the concrete, making us fully aware but temporally unable to do anything about them. Embrace the fact that you have quite a bundle of seconds, moments, left this year before we begin counting down the last ten right before midnight (Maybe you’ll do it in Times Square next year, which despite the recommendation of my feet and bladder, I highly suggest).

There is such a glamorous hue that tints our memories when we look back at the chaos that was January, that was deciphering the changes and the resolutions that we desperately confided in as we watched a bright glittery ball fall slowly to an eager countdown.I’m glad to be standing on my feet, one year later, knowing north from my south, holding on to some form of direction and ready to power through topsy-turviness of the decisions and the mistakes I will adventurously make again this year. The first one being, stop saying YOLO and the second one, never do the Gangham style dance, again.

Wishing you happiness, this year, my readers (who have become my dearest friends). Thanks for periodically making your fingers type in my URL and visit my site, my life, my heart and laugh a little with me. In 2012, I wrote 49 blogs and had over 15,000 readers. A milestone that in order to achieve I had to give up wondering what people would think of my words, my real-life stories, surrender fear and just do exactly what I love to do, in this order: write and relate.

Resolve to stick with me in 2013 (Scroll up and subscribe in the box on the right)!

I found myself stumbling around Times Square in NYC last week when I snapped this photo in front of a Lulu Lemon sign….