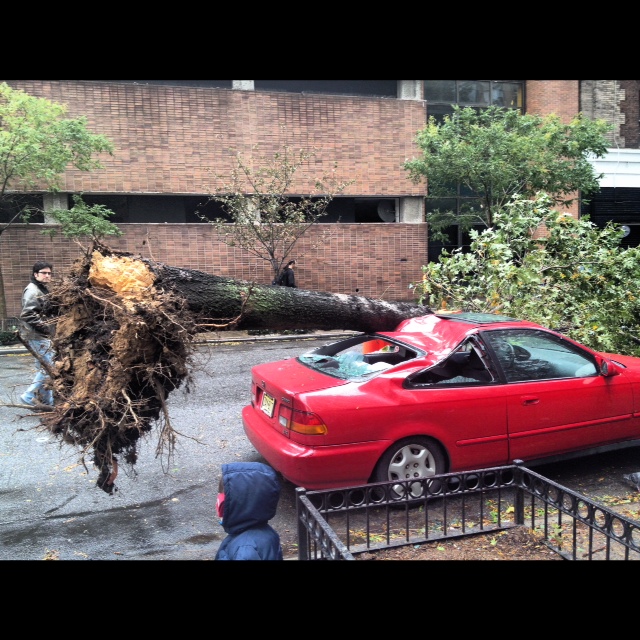 “Every storm runs out of rain, just like every dark night turns into day.”–Gary Allan

Bananas. You begin to crave bananas. You think to yourself if the world is about to end at least you’ll have potassium in your system and then, well then, you can figure the rest out.

It’s a Sunday afternoon and after your mom, your Twitter news feed, the homeless guy on the corner of 34th and 7th, and President Obama tell you that this Sandy is going to be a real heart breaker, and you decide to take some baby steps to be proactive.

But you’re not alone. There’s clusters of people, still wearing parts and pieces of last night’s Halloween get-ups, waiting in long lines outside of grocery stores frantically screeching about how they need flashlights and spaghettios and all you want is for everyone to just remain calm, and some bananas.

You’re waiting in this line thinking if the world is indeed going to end, like some half pirate half skeleton says it’s going to, then you wouldn’t want to be wasting time in line waiting for rations of bread and water, you’d want to be at some techno disco concert. Throwing your hands up in the air, and stuff.

You snag the last loaf of bread and a bottle of Evian, you feel prepared. “You’re from Florida”? The lady at the checkout counter says to you as she checks your ID with a tone that indicates ‘You can’t buy the last loaf of bread. Aren’t you made of hurricane supplies? “Yes,” you tell her and she snorts, “Oh girl, you brought the storm with you.” (psh, like you’ve never heard that one before).

You spend the first day at home. Painting your toe nails, answering emails, watching wild humans on the television dancing around unsafely to the blowing wind by the East River, casually stuffing your face with Goldfish and Oreos. You could get used to this, you think.

But then the lights start to flicker, and you’re holding on tightly to the remote control and your sanity. And before you can finish screaming “PLEASE DON’T…”, they turn off. Completely and utterly in the dark, you’re just jolting like a continuous pulsing dial tone, whining, “say it it isn’t so”

12 hours, 24 hours, dare I say it you’re rounding the corner to a meager 36 hours of huddling around flickering flames of a candle, munching on dry goods, splashing trickling freezing cold water on your ashy skin.

You play a game of pick up sticks with strings of pasta, clean out every single closet in your 10×10 apartment, do 145 jumping jacks, recite a batch of tongue twisters, run in place, until you find yourself engaged in a staring contest with a stuffed animal moose. Thumbing the fur out of his eyes, whispering sweet nothing in his antler ears, watching him watch you and realizing that it’s officially happened. You’ve lost your power, your main food supply and your mind. And your not sure which one you’d beg to have come back first. It’s when you finally try to get up, to change, to wiggle around a little that you notice you’re buried underneath a pile of empty candy wrappers, strewn out blankeys, lifeless computers and cell phones.

You have to get out.

You take one step at a time. You have 26 more flights of stairs to go until you’ve officially hit the bottom and get to go outside.

Fresh air is being absorbed by bundles of shockingly obedient people all walking in single file lines. It’s as if they’ve been pounding on locked doors, begging to get out for days. The trees have already fallen, the scaffolding is no longer begging to hang on, the giant crane on 57th street seems to be chilling.

What chaotically simple people we are, wanting the same things: food, water, shelter, and electrical outlets.

And so you travel north where rumor has it they have a few of those things they are willing to spare. You crawl underneath a rack of potato chips to plug your phone into an electrical outlet at a deli on Park avenue. You venture to the Upper East Side and lifelessly knock on the door of a good friend and ask if you could spend a couple minutes alone, in a warm, warm shower.

You’re fine, you’ll be fine, you tell this man who is calling you to remind you to vote for whatever-his-name-is in upcoming election.

And you count the things you still have on one hand: your health, your family, that pizza shop on 39th street, your sense of humor, your apartment. You’re alive and that’s all that matters.

In a couple of days from now, you’ll be back sitting in your apartment underneath bright lights, with the TV blasting, writing emails while chatting on the phone while Skyping someone in Moldova. Things will go back to normal.

The least you can do is enjoy life while all of the devices that infamously weigh you down are in a forced off position.

You do, indeed, feel lighter this way.

NOTE: I’m writing this with the electricity I bummed off a convenience store on 44th and park. Thank you for letting me plop my butt down, charge up, and most importantly–write my way back to sanity. I’ll buy a bag of chips, now.

Hey YOU, subscribe to this blog already! Will ya? Just type your email into the pretty little magenta box on the top right.

ALL MY FRIENDS ARE ENGAGED (FAQ)

“The things you’ll learn from ALL MY FRIENDS ARE ENGAGED: Never trust a boy wearing jorts and sometimes, love can be as messy as…