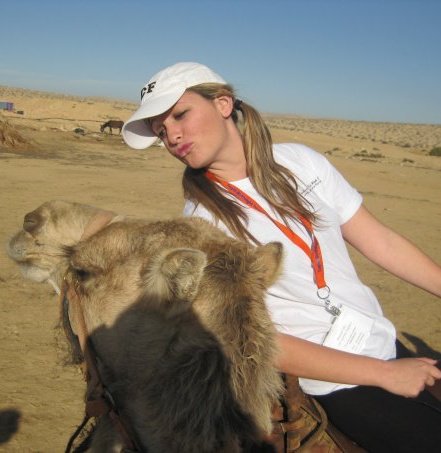 The flight attendant nudges my shoulder, dangling a tissue that I grab to wipe the drool that’s been slouching on the edge of my cheek for the past five hours.

“Boker Tov, Good Morning,” she says with an accent that makes me certain I’m still dreaming.

I’m fighting with thick crud that’s been building up in my eye sockets when I open the window shade and notice that there’s people running off the plane, dropping their iPods and kissing the ground. Full on pinching the gravel and lipstick-staining the pavement in euphoria that they have finally landed here, in Israel.

But how could I be at home in a place I have never been before? I was raised to know what Israel looked like. Studied maps of the country the size of New Jersey and built replicas of the Western Wall out of Styrofoam and Popsicle sticks for Hebrew school. But at the age of 20, I’m stepping off a plane onto infamous pavement that gets more media attention and hearts throbbing than Lindsay Lohan.

I’m here on a program called “Birthright Israel”, which sends young Jews from around the world on a 10-day tour of Israel. But what makes the trip memorable, one that separates it from a group of wide-eyed tourists eager to munch on Fallafal and lay on the Dead Sea, is the 20-year-old Israelis that also go on the trip. Except these 20-somethings aren’t in college, they don’t spend their time talking about what electives they are going to take to boost their GPA next semester, or that Sorority formal they didn’t go on because they got too drunk, or how much money they need to save so they can go on a Spring Break cruise to Mexico. They are soldiers in the Israeli army, because at 20, that is what they do. They spend their 24 hours of the day fighting for their lives vis-a-vis their country, while we are just fighting about things. 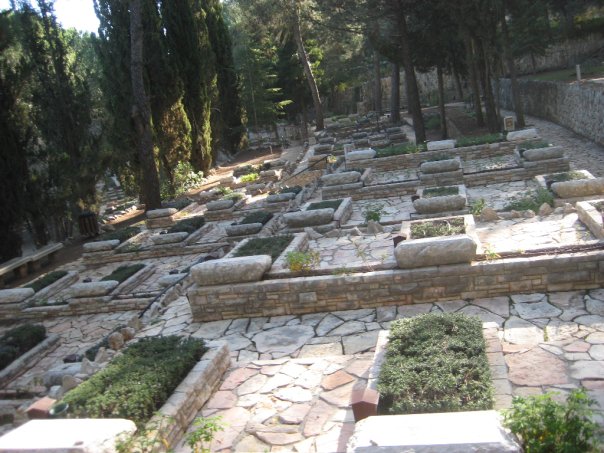 One of the final days of the trip, our group goes to Mount Herzl, which sounds like the most peaceful place on the planet, and for many—it finally is.

It’s Israel’s national ceremony. A well-kept plot of land with deep-rooted trees whose branches flail uncontrollably the air, providing shade and comfort for those who come here to grieve.

There’s miles of tombstones, each with a bed of green grass. We walked down and around paths careful not to interrupt the quiet graves adorned with letters, photos, Israeli flags. The writing on the graves are in Hebrew, so we don’t know much about the person, but it doesn’t matter. They all look alike: pale thick stones that make the person that lies underneath it seem strong and mighty.

We’ve been walking for 30 minutes, when one of the soldiers on the trip is standing alone, resting his face in the palms of his hands. For the first time, the strongest 20-year-old I’ve ever met is temporarily, in front of my eyes, falling completely apart. He’s leaning forward to touch the grave and becomes grounded in the eyes of a young, good-looking guy that’s smiling back at him in a photo.

He tells us, as hard as it is to say, that this was his good friend. He was only 18 when he was killed. He was just like us, the soldier says. Charming, excited about life, in love—in love with this country.

We surround him in as much silence as our racing hearts will allow. Tears are contagious, I’ve come to understand.

And suddenly, at the age of 20, I’m overwhelmed by what it means to have a place, in this very chaotic world, to call home.

But if you’ve ever been lost, really lost, and comforted by knowing that you have a place to end up—a place to call home, you’ll understand a lot about this country and what it means to the people who live dangerously unworried, willing to do what it takes, to never have to feel lost again.

And when it’s time for me to leave, to go back to Florida, I say goodbye to the soldier who taught me things about life that will never leave me, the one who I know I may never see again, and he says to me, “Jen, are you excited to go home?”

I tilt my head in confusion, mount my arms around him, and say, “I already am home.” 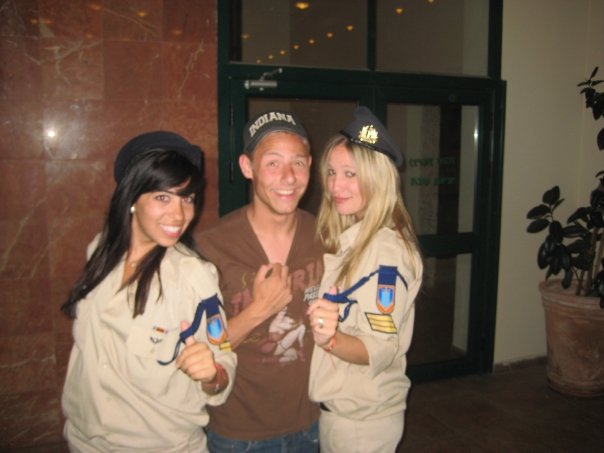 (I got to wear an IDF uniform – thanks to my good friend, Ido Cohen)

I wish we could high-five, even hug hello in person – and maybe someday soon we’ll have that chance. But until then, welcome to my website. It’s my most favorite place in the world (beside home, Forever21, and the library – of course). I hope you’ll click around a bit – and read something you like. And if you do, come back again! Or better yet, click the subscribe button – on the top right – and i’ll send you an email on Monday Mornings with tips and fun articles to help kick your butt out of bed.

FROM ALL MY FRIENDS ARE ENGAGED – 1 YEAR ANNIVERSARY

“Writing a book, kind of like going on a first date, sounds like such a brilliantly exciting idea. And it is, until moments before…