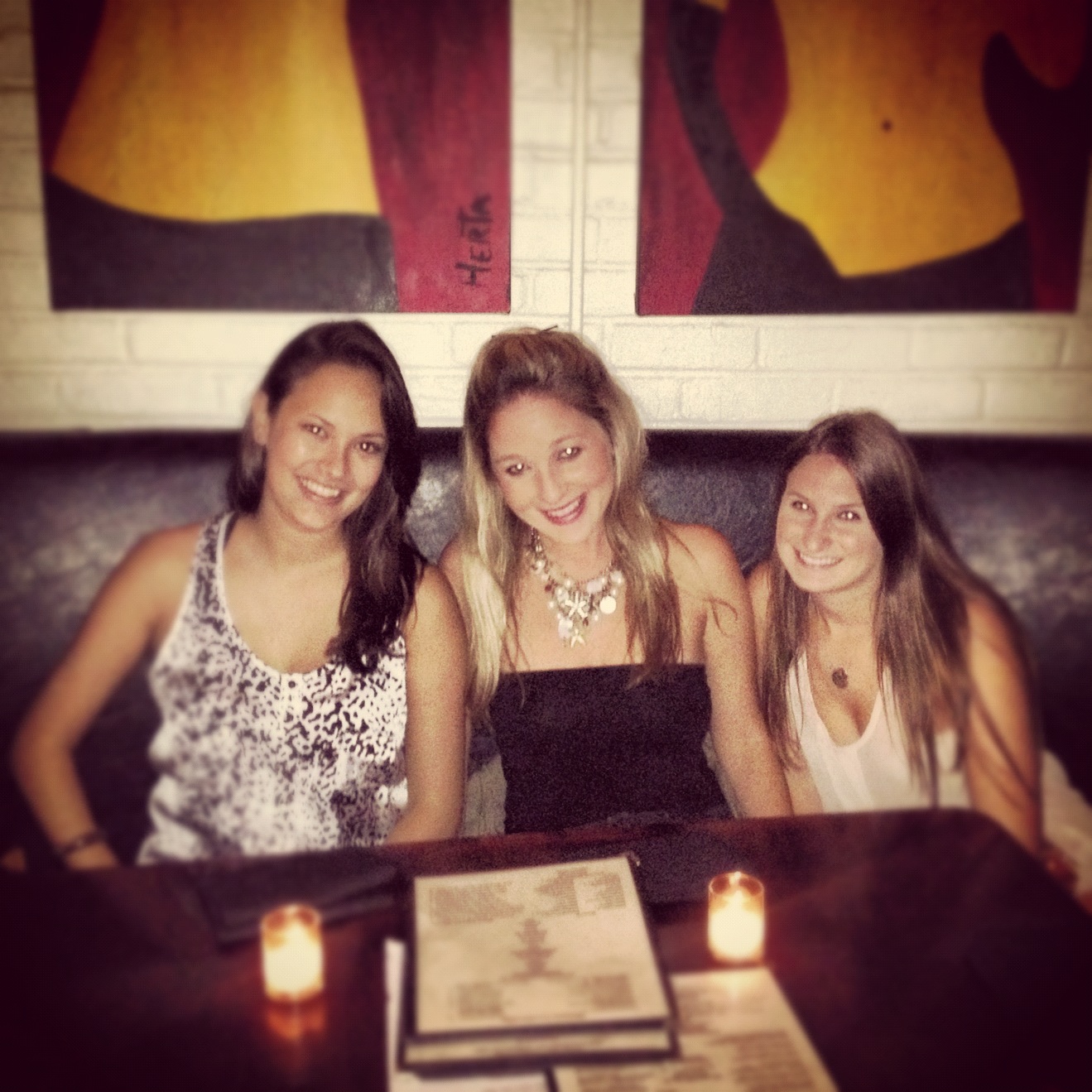 A photo from last night when my two friends and I believed we were being stood up on our first-ever “Group Blind Date”, we could have only been so lucky.

“People go to casinos for the same reason they go on blind dates–hoping to hit the jackpot. But mostly, you just wind up broke or alone in a bar.”–Sarah Jessica Parker

They say love is blind, but really who are we kidding.

I’d say love is more like those spinning rides at carnivals that strap you down and swirl you around until you’re blue in the face, or that feeling you get after you stuff your mouth with too much FroYo and suddenly your cranium gets all frozen, or the nervous shakes your hands get right as you are about to move a block during the game Jenga. To be precise, love is exactly like acid reflex.

Last night I gave in to this blind  concept. In a city that attracts millions where everyone is moving to the beat of an AVICII song, sometimes the only way to meet people is to be forced to reveal in a matchmaking service that arranges a blind date for you—and in this case– two of your  dearest friends. I signed up for this service called Grouper that sets you and two of your friends up on a blind date rendezvous with another lad and their two friends, bringing together Sgt. Pepper’s Lonely Hearts club hoping each finds their respected match.

My belief in this concept and rad idea to make dating less awkward proved to be true when I arrived with my two non-judgemental, always ready for a good time, friends who kept snapping me back to reality when I got nervous jitters waiting for our three Prince Charmings to join us.

And that’s what we did, we waited, and waited and waited until 25 minutes past the meeting time they decided to show up.

Three disgruntled guys in button down shirts, with shaggy hair and bloodshot eyes approached our table and without introduction, a standard ‘my name is’ or a friendly handshake, they plopped their butts down. The spokesperson of the group, the one wearing light pink, looked me into my enlarged eyes, did a wavy wiggle on his chair and blurted out, “So girls, what’s your story?” A rush of stale Whiskey and a pinch of sour tequila hit my nose and I realized these guys were straight-up-on-the-rocks-drunk.

That was the only full, sensible question or statement any of the boys made during the date. Everything else that came slurred out of their mouths left off important parts of a sentence: nouns, verbs, and punctuation.

“What do youuuuuu work?” One of them spit out to my Friend Michelle who politely replied with a smile that she plans events for a local hospital.

“So you’re a Nurse? And you save lives? I have a lot of problems that I think could use your help with,” he managed to tell us.

We tried to play connect the squiggly dots and carry at least one full conversation with these boys before giving up. But one of them lost his cell phone and started to crawl on the sticky floor and the other boy was downing shots in between every other word.

I sat there scared, mostly that the boy in the light pink, sitting across from me, was going to projectile vomit in the next 50 seconds.

And that’s when I told them it’s over. This uncomfortable, awkward, not going anywhere but your head resting on the toilet kind of night, was officially coming to an end after a record 23 minutes.

New York has weaved some fire into my personality. It’s made me speak up and out when I feel uncomfortable or know someone is not treating me the way I deserve. And so I have become a person that even if my voice shakes and my face turns tomato red, I’ll say what I need and I won’t let myself suffer.

Anyway, It was 9:30 pm on a Wednesday night and this was a gigantic waste. The ice cream shop closes at 11 and I have to finish the third Hunger Games book, they were simply now using up my time, my energy, my conversation skills and my liver.

I’m not swearing off dates. Whether they come blind, online, a friend of a friend or just the natural way of knocking over someone’s coffee and having them ask you out (that happens right?).

It’s just that the most fantastic people that I’ve spent time doing cartwheels with in this world, I’ve simply just met along the way. On a cold night in a small warm spot in Minnesota, while eating a slice of pizza on the Santa Monica Pier, while volunteering for a club one Saturday during college. While simply just riding along the way.

I ended my blind date last night in the most comfortable way I know how to handle awkward situations, digging a spoon into some soft serve. With every bite I realized even more that there is truly only one rule when it comes to love–when it comes to where/when/how to meet people and then once you have found them, how you deserve to be treated:

A special thank you and an “I-Owe-You-One” to my two gal pals who gave in to the crazy idea to do this. It’s rare you find people in life who accept you for all your weird quirks and it’s even more rare you find people who will tag alone on your wacky ideas of a good time. Thanks for having my back and for handing me a spoon and telling me to dig in, the best and the only way to end any outrageous night.

“New York is strange in the summer. Life goes on as usual but it’s not, it’s like everyone is just pretending, as if everyone…